General
News ID: 1428851
In honor of the Muslim holy month of Ramadan, the month of the revelation of the Holy Quran, an exhibition of "Secrets of the Holy Book" opened in scientific library of UGGU. 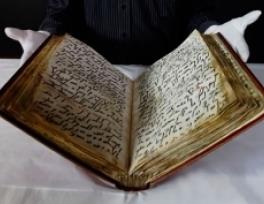 The exhibition has displayed about one hundred Quran copies from around the world, including rare copies of pre-revolutionary period including the first printed Qurans issued during the reign of Emperor Alexander I (1801-1825) by Muslim Tatars.
Rare copies of the Holy Quran collected by teachers of the Department of Theology will also be displayed at the exhibition.
Master classes on Quran recitation and Arabic calligraphy will be conducted for the guests and participants of the event under the framework of the exhibition.
The opening ceremony was held on July 12. The event took place at the reading hall of scientific library of the University.
The exhibition will last 2 week until the end of the holy month of Ramadan.
Source: Islam.ru