I Am Not Charlie 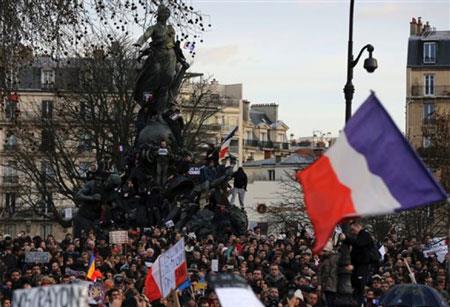 "For a Muslim, the Prophet Muhammad [PBUH] is more important than their own parents," a Muslim young man in Sarcelles, who did not wish to be identified, told the BBC on Tuesday, January 13.

"They were warned but they kept on mocking the prophet," the young Muslim said.
"But you cannot kill for that. You cannot go against press freedom in France. Still, they will have to answer to God."

Over the past years, the satirical weekly succeeded in offending all faiths.

In September 2012, the French weekly published cartoons displaying a man said to be the prophet as naked.

In 2011, the office of the magazine was firebombed after it published an edition "guest-edited by Muhammad", which the satirical weekly called Shari`ah Hebdo.

Other cartoons made fun of the Pope, Muslims’ niqab or burqa, Vladimir Putin, Angela Merkel and many world leaders.

"It set out to provoke people for its own amusement,” a French Muslim pensioner said.

"It attacked their religion. Make fun of yourselves if you will, but leave others alone. The media is like a car: you need to have a license to be on the road, otherwise you will be a danger to others. Charlie had no license to put people's lives at risk with their provocations."
Maintaining its sacrilegious tone, the magazine has kept a long reputation for being provocative.

On Monday, it announced the launch date of a new edition on Wednesday, the first after last week attack which resulted in the death of ten journalists and two policemen.

Though the victims included two Muslims, Muslims have fallen victims to increasing trend of anti-Muslim attacks over the past days.

According to the French Interior Ministry, more than 50 anti-Muslim incidents have been reported across France in less than a week after the attack on satirical weekly Charlie Hebdo.

Among the 54 anti-Muslim incidents, there have been 21 reports of shootings and grenade throwing at Islamic buildings.

Despite of their anger with the magazine, French Muslims announced a clear stance against killings.

"Real Muslims condemn these attacks," another Muslim, 22, who also did not wish to be identified, told BBC.

"Those who committed them were insane. The attack on the kosher supermarket was a catastrophe for France and for the world. If you kill one man it is like you kill all of humanity. That is how we think."

Seeing the Charlie Hebdo attack as a betrayal of Islamic faith, leaders from Muslim countries and organizations have joined worldwide condemnation of the attack, saying the attackers should not be associated with Islam.

Moreover, Muslim leaders and citizens joined a huge mass rally in solidarity with the families of the victims of Charlie Hedbo last Sunday.