General
News ID: 2788104
TEHRAN (IQNA) - A new Danish anti-radicalization program has been criticized by the Muslim community an attempt to “stigmatize” the religious minority in the Scandinavian country. 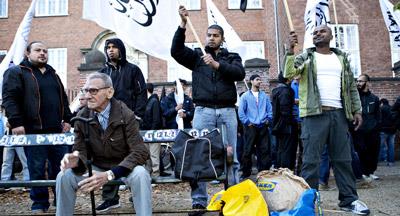 “The Islamic Society in Denmark considers the plans as being rushed through with no proper aim other than to stigmatize the Muslim minority,” Imran Shah, spokesman of the Islamic Society in Denmark, told Sputnik on Thursday, January 29.
“The Danish government turns a blind eye to right wing extremism which is booming at the moment and has done so for a few years now.”
Shah comments followed introducing a three-year program two days ago that aims to fight radicalism among Muslim youth in Denmark.
Nearly $9 million were allocated for the program that mainly targets suspected “fighters” returning from conflict zones in the Middle East.
For Danish Muslims, the anti-radicalization program adds to their woes following Paris attacks that left 17 killed and led to unprecedented anti-Muslim sentiments across Europe.
It also comes amid the rise of the anti-immigration Danish People's Party (DPP) which has been escalating its anti-Muslim rhetoric since winning the elections to the European Parliament in Denmark last May.
Across the Nordic region, anti-immigration parties, which languished after Norwegian far-rightist Anders Behring Breivik killed 77 people in 2011, are gaining support.
In December 2013, Danish People's Party (DPP) announced its plans to vote against the bi-annual citizenship law that grants hundreds of Muslims the Danish citizenship.
The far- right party claimed that 'too many' Muslim immigrants were not welcomed in the Denmark.
Despite DPP's opposition, the Danish parliament has voted unanimously in favor of the bi-annual citizenship bill.
According to the Danish law, the parliament has the right to grant the citizenship twice a year.
Source: On Islam