US Needs DAESH to Advance Own Goals

Interview
News ID: 3458945
TEHRAN (IQNA) - As many analysts have said, the United States needs ISIL or DAESH to advance its own goals throughout the region.

Extremist ideas have always been there alongside genuine intellectual currents, just like weeds which grow alongside flowers in any garden. But genuine Islamic thought has always overcome such deviated thoughts due to its logical rich content.

History bears witness that before the area of colonialism deviation had affected the Islamic world as such. Undeniably, historical facts also indicate how the old colonialist power, Britain, two times rescued Al Saud rule from total collapse. Thus, the takfiri terrorism grew on the ground of colonial relations.

After the collapse of Ottoman power, the British support for the moribund Al Saud rule resuscitated this cancerous phenomenon. This led to a total change in the political future of the region. Thus, a Bedouin tribe with reactionary ideas which had been banned in Islamic world for twelve centuries was strengthened and the seed of violence and discord grew in the region.

One century after the tribal Saudi regime has introduced its corrupt narrative of Islam, Wahhabism has excommunicated Muslims from various sects, desperately trying to portray itself as a real image of Islam. The Wahhabi Muftis issued decrees which permit an encouraged shedding of Muslim blood, shedding of innocent blood, even the blood of women and children.

The fake Wahhabi scholars deem it permissible, even obligatory, to kill Muslims in Syria, Iraq and elsewhere. The Saudi regime keeps beating the drum of sectarianism and violence through supporting terrorists financially and ideologically. But Western governments and politicians who are vexed as soon as a Zionist is injured in a remote corner of the world keep silent about the dead bodies resulted from the bestial crimes committed by the takfiri terrorists in Iraq, Syria, Yemen and elsewhere.

After the end of the Second World War, when the United States replaced Britain as the domineering power in the Arab world, it considered the Saudi regime as its virtual colony and supported Wahhabism much more.

Former US Secretary of State Hillary Clinton in her speech in the Congress on Capitol Hill explicitly admitted the American intervention is helping Wahhabi current and said the United States had equipped Taliban and Al Qaeda 20 years ago.

Hillary Clinton continued that the United States did not like to see the Soviet control over central Asia.

According to the then US President Ronald Reagan and US Congress, US collaborated with Pakistani army and Pakistan’s intelligence agencies to arm the so called Mujahedeen from Arabia and other places, and introduce Wahhabism as a symbol of Islam to overcome the Soviet domination of Afghanistan.

After the highly dubious September 11 attacks in 2001, the US Government continued to support the Wahhabis. The Saudis and Qataris managed to garner media and political support of many European countries, turning the Islamic concepts of Jihad and martyrdom into tools in the hand of supremacist policies of new colonialists. Now the United States and its allies claim to be fighting terrorism by forming so called Anti-ISIL Coalition.

Apart from media propaganda and speeches of US and European politicians, Iraqi and Syrian public witness the crimes committed by these extremist and terrorist groups. Iraqi and Syrian witnesses and experts have many times said the aircraft of so called US-led Coalition have actually dropped weaponry, food and supplies for the ISIL or ISIS terrorists. Furthermore, these terrorists are hospitalized and received medical treatment at Israeli medical centers. And top Zionist officials including the Zionist regime Prime Minister Benjamin Netanyahu have visited ISIS or ISIL terrorists receiving medical treatment in Israeli hospitals.

As one Iraqi legislator put it, "the US fight against DAESH or ISIS is no more than a lie. If the US had intended to fight this terrorist group, it could have annihilated it many years ago.” 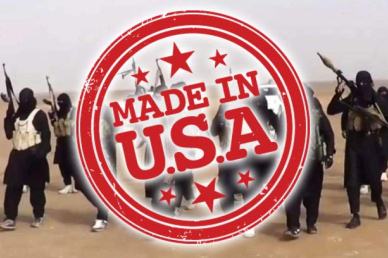 As many analysts have said, the fact that matters is that the United States needs ISIS or DAESH to advance its own goals.

In one part of his recent letter to young people in Europe and the Americas, Supreme Leader of the Islamic Revolution Ayatollah Seyed Ali Khamenei has said: "Dear youth! I have the hope that you- now or in the future- can change this mentality corrupted by duplicity, a mentality whose highest skill is hiding long-term goals and adorning malevolent objectives. In my opinion, the first step in creating security and peace in the world is reforming this violence-breeding mentality. Until double-standards dominate western policies, until terrorism- in the view of its powerful supporters- is divided into "good” and "bad” types, and until governmental interests are given precedence over human values and ethics, the roots of violence should not be searched for in other places.”

DAESH and other terrorist groups are only stooges and not the main enemy. They do not have much power; otherwise, they must have conquered Iraq and Syria by now given the considerable aid they have received so far. The main enemy is the US and the Israeli regime that are pursuing their own goals in the region by creation divisions among Muslims.

Thanks to Allah the Almighty and the role played by religious scholars, intellectuals and university teachers in raising awareness the takfiris’ days are numbered and their agendas are no longer hidden from the general public.