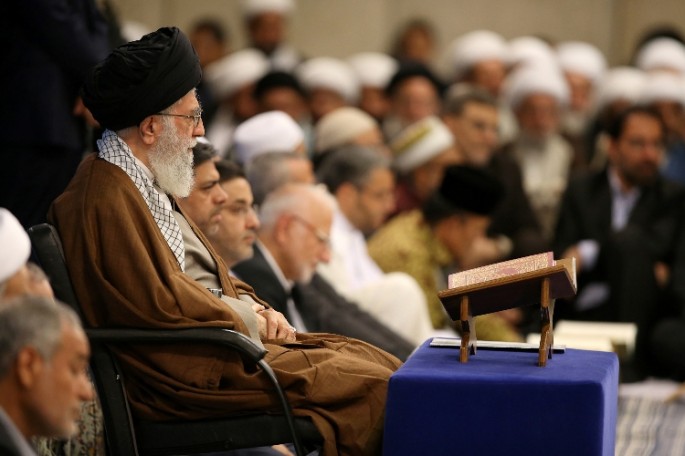 Speaking Wednesday in a meeting with Quran reciters and memorizers and members of the panel of judges of Iran’s 33rd International Quran Competition, the Leader underlined that the Muslim Ummah ought to move toward unity and solidarity by holding fast to this great Divine blessing (the Quran).

Ayatllah Khamenei stressed that the Ummah is more than ever in need of the teachings and concepts of the Holy Quran.

Elsewhere the Leader said certain Muslim governments have been betraying their people by helping the US implement its policies in the region.

"Some Islamic governments are betraying their people and the Islamic Ummah and paving the way for the American influence,” His Eminence said.

"Certain (governments) in the Islamic world, instead of clinging to the Quran, are clinging to Taghut,” Ayatollah Khamenei said, using the Arabic word for idolatry or the worship of anything except Allah.

"America is the major Taghut and the Great Satan,” the Leader added.

Ayatollah Khamenei said, "Those who are implementing the American policy in the region are adhering to Taghut and do not have disbelief in Taghut.”

The Leader also said Takfiri terrorists and Wahabbi affiliates are doing the enemy’s bidding by "consigning the Palestinian issue to oblivion” through their reign of terror in the Middle East.

Daesh and other Takfiri groups follow an ideology rooted in Wahhabism which is preached by Saudi clerics and is tolerated and even supported by its rulers.

The Leader said tremendous sums of money is being spent to harm Islam and Muslims, but "we have no doubt that victory belongs to Islam.”

"The enemy is afraid of a powerful and brave Islam,” Ayatollah Khamenei said, citing Iran as the main target of attacks because of this fear.

"Resistance against America is the main point of Iran’s prowess,” the Leader said, adding "neither the enemy’s promises deceive us nor its threats frighten us.”

"They (enemies) know that the Islamic Republic's stances are influential in the world. We are sincere with Muslim nations and our words and deeds are the same,” Ayatollah Khamenei went on to say.