General
The link was copied
News ID: 3463169
TEHRAN (IQNA) – An exhibition in Lebanon is showcasing a collection of rare items believed to have belonged to the Prophet Mohammad (PBUH) to coincide with the Muslim holy month of Ramadan. 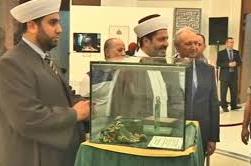 The event, entitled 'Exhibition of the Noble Prophet's Remnants' is being held in the northern city of Tripoli with the aim of showing the people of Lebanon exquisite data-x-items that is believed to have belonged to the Prophet, his inner circle and descendants.

Over a year in the making, the event is the brainchild of local organization, 'Akid Fina Sawa' ('Together We Sure Can').

Violette al-Safadi, who heads the organisation said it wants visitors to feel as though they are on a global tour of the relics without having to leave the country.

"We can see here everything present in Turkey, Saudi Arabia, Egypt, Pakistan, Afghanistan, Palestine and other places," said al-Safadi.

Khaled al-Tadmori, who co-curated the exhibit, highlighted the need to counteract a perceived negative narrative on Islam in the world today.

"(This event) will be a civilized response to the repeated campaigns of abuse on our holy Prophet, with our representation of this biography in this artistic form which attracts the young and adults. It first of all defines our religion as a religion of peace," he said, adding that it also great publicity for Tripoli.

Some of the rare data-x-items on display include a piece of hair thought to have belonged to Prophet Mohammed, ancient Qurans and the girdle of a dress said to belong to the Virgin Mary from her church in Homs in Syria.

For Muslims, Ramadan is a time of intense spiritual reflection. It is also the month in which they believe the Quran was revealed to the Prophet.

Tripoli resident, Bilal Abdelhadi said the presence of the exhibit had enhanced the Ramadan spirit in the city.

The exhibition will end on June 21.