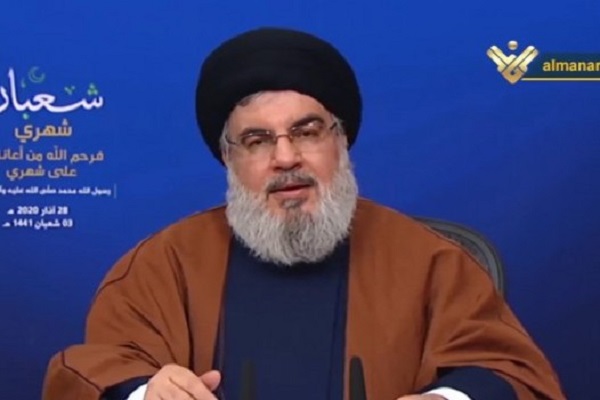 In a televised speech broadcast on Al-Manar TV Channel on Saturday, Nasrallah called on all the educated, elites and thinkers to observe the major changes caused by the coronavirus, adding that as a result of them the world could be reshaped and political coalitions may break up.

He highlighted that the process of returning the Lebanese expatriates, who are stranded in corona-hit countries and interested in going back to their country, must start immediately.

Sayed Nasrallah explained that any procrastination in this file will expose the expatriates to health dangers in the countries which will witness a large-scale outbreak of the coronavirus during the coming days.

Sayed Nasrallah added that the coronavirus outbreak might lead to a social and security collapse in certain countries, which will endanger the Lebanese expatriates as they may be killed there.

“Even in the United Sates, the rate of arms purchase has sharply increased because of the fear of the security collapse.”

Sayed Nasrallah maintained that all the Lebanese locked in corona-hit countries have the right to return to their country, adding that the Lebanese authorities’ duty to return them must be also indisputable.

“Whatever the threats are, the Lebanese authorities must respond to the pleas of the expatriates,” Hezbollah leader said, “Preventive measures can be taken to guarantee a safe return to the expatriates.”

Sayed Nasrallah further stressed that the returning expatriates have houses in Lebanon and have vowed to financially contribute to the process aimed at bringing them back to their country.

Sayed Nasrallah further called on all the Lebanese, including the wealthy people, to help the government carry out this mission which would be a source of pride for the cabinet, when done.

“Medical capabilities, closed hotels, and funds must be consecrated by all the parties for this mission.”

Sayed Nasrallah also urged all the Lebanese political parties to avoid the mutual provocations and cooperate in order to help the government in face of the Coronavirus challenge.

In this context, Sayed Nasrallah called on the bank owners to ease the transactions from the Lebanese families to their children studying abroad, stressing that it is a simple mission in case a serious decision is taken.

Hezbollah Secretary General stressed that all the Lebanese must recognize the fact that the confrontation with the coronavirus is a world war as all countries are preoccupied with this challenge, citing the failure of many world governments to address this threat in their countries

“In comparison with the confusion storming the world countries, including the major powers, the confrontation with the coronavirus in Lebanon is acceptable and promising.”

Sayed Nasrallah pointed out that the government is taking good measures in this regard, adding that Hezbollah does not oppose any of them and explaining some people propose declaring the state of emergency without knowing what it means.

In this regard, Sayed Nasrallah hailed the efforts exerted by President Michel Aoun, House Speaker Nabih Berri, PM Hassan Diab and all the ministers to confront the coronavirus.

Sayed Nasrallah highlighting the importance of mitigating the political rifts in the country in order to concentrate all the efforts on facing this pandemic, citing the eminent threat posed by the virus whose nature and essence have not been discovered by the scientists yet.

Thus, the plan to face the coronavirus depends mainly on imposing home quarantine and social distancing in order to siege the threat, according to Sayed Nasrallah who added that this is adopted by all the world countries, including China.

Sayed Nasrallah called on the Lebanese to keep committed to the state general mobilization, adding that violations will waste all the previously exerted efforts.

Sayed Nasrallah hailed all the initiatives of the political and social organizations to help the needy people during this crisis, highlighting the veracity of competition in this field.

Hezbollah Chief suggested coordinating the efforts among all the parties and organizations, shedding light on helping the families which reject to apply for aids due to moral concerns.

Sayed Nasrallah called the judiciary to try all the merchants who are raising prices and monopolizing during the crisis, urging the honorable tradesmen to break monopoly and lower prices by dumping the market with their commodities.

Sayed Nasrallah further highlighted the importance of ending the crisis of the small depositors, stressing that the human and moral responsibility imposes on the banks to solve this problem by returning the funds.

Hezbollah leader addressed the bank owners, “What is the suitable rhetoric that we should use in order to stir your humaneness?”

“You have earned billions of dollars from the Lebanese deposits since 1992, benefiting from certain governmental policies. Now you have to help your nation during this calamity.”

“You donated $6 million dollars to the Lebanese government, while your children’s weddings used to cost millions of dollars.”

Sayed Nasrallah considered that the Banking Association grant to the government was shameful, highlighting the ceremony held at the Grand Serail for this purpose.

Sayed Nasrallah called on the premier Diab to announce publicly that the banks would not fund their nation during this crisis in case they reject that, adding that this would be enough.

Hezbollah Secretary General called on all the educated, elites and thinkers to observe the major changes caused by the coronavirus, adding that since World War I and II, the world will be reshaped and political coalitions may break up.

Sayed Nasrallah wondered whether the United States would keep united or the European Union would remain, adding that even the efficiency economic system of capitalism and the heath care policies are being questioned.

Sayed Nasrallah also called for considering the moral lessons given by the woe of the coronavirus “which is still vague despite all the technological and scientific development in the world”, citing the confusion of the US administration in dealing with the pandemic.

Hezbollah Secretary General hailed the steadfastness of the Yemeni people in face of the 5-year Saudi-led war on their country, calling on KSA to halt its aggression amid international tendency to ease conflicts in order to concentrate efforts on fighting the coronavirus.

Sayed Nasrallah also greeted the initiative of Ansarullah leader Sayed Abdul Malik Al-Houthi who proposed releasing a number of KSA’s servicemen in exchange for Palestinian prisoners in Saudi, which highlights his commitment to the Palestinian cause.