Palestinian Likens His Arrest to that of George Floyd

General
News ID: 3472458
TEHRAN (IQNA) – A Palestinian whose videotaped brutal arrest by Israeli soldiers went viral earlier this week said that he was nearly paralyzed during the event, likening his arrest to that of George Floyd, who died while being arrested by US police in May. 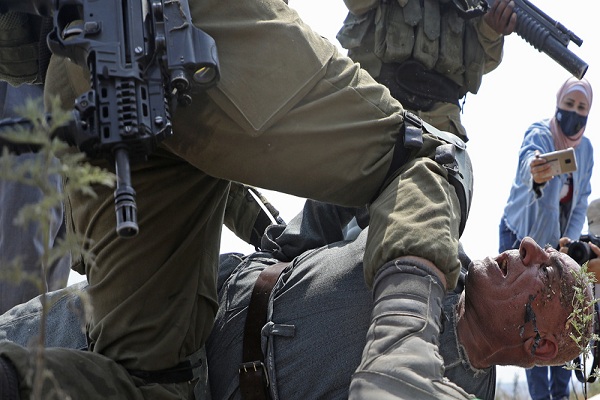 In an interview published by the Ruptly video news agency on Friday, Palestinian activist Khairy Hanoun recounted how the arrest happened after he went out to take part in an anti-occupation protest in the Palestinian town of Tulkarm in the West Bank.

He explained that he had sought to tell an Israeli soldier not to point his weapon at Palestinian children looking at the protest.

“But he refused, so I tried to pull the weapon. Of course, I did not want to take the weapon from his hand, but the rope of the weapon only," he said.

The 65-year-old activist was then subject to a brutal arrest. Footage of the incident was widely shared among English and Arabic-speaking social media users.

“What surprised me was that he put his foot on my neck, I am old, lying on the ground, almost paralyzed after the incident, I was not resisting," he said, according to Press TV.

"What came to my mind that moment is the American policeman who killed the black citizen in the United States," he added in reference to Floyd whose death has led to more than three months of anti-racism protests in the US.

“If you step on his neck, you are trying to kill him,” he noted.

Many observers have highlighted the similarity in tactics used by American police and Israeli forces in suppressing protests.

According to the UK-based rights group, Amnesty International, police from across the US have been receiving training from Israeli forces on issues such as “crowd control, use of force, and surveillance”.