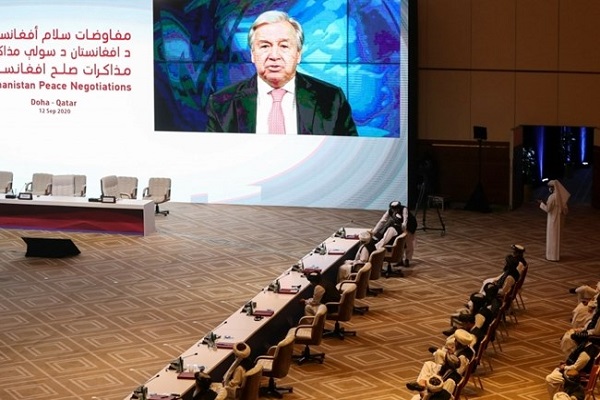 The discussions are important in the search for lasting peace that will also provide an exit for US and NATO troops after nearly 19 years.

The sides will be tackling tough issues. This includes the terms of a permanent cease-fire, the rights of women and minorities and the disarming of tens of thousands of Taliban fighters and militias loyal to warlords, some of them aligned with the government.

The Afghan sides are also expected to discuss constitutional changes and power sharing during the talks in Qatar's capital of Doha, where the Taliban maintain a political office.

Even seemingly mundane issues like the flag and the name of the country __ the Islamic Republic of Afghanistan or as the Taliban's administration had been known, when it ruled, the Islamic Emirate of Afghanistan __ could find their way on to the negotiation table and roil tempers.

Among the government-appointed negotiators are four women, who vow to preserve women's rights in any power-sharing deal with the Taliban. This includes the right to work, education and participation in political life __ all denied women when the Taliban ruled Afghanistan for five years.

There are no women on the Taliban's negotiation team, led by their chief justice Abdul Hakim.

Abdullah Abdullah, who was named as head of the High Council for National Reconciliation that's overseeing the talks, said in his remarks that the sides do not need to agree on every detail, but should announce a humanitarian cease-fire.

He said that if the negotiations bring about lasting peace, protect Afghanistan's independence and lead to a system based on Islamic principles that preserves the rights of all people, "then both sides will be peace heroes."

Taliban representative Mullah Abdul Ghani Baradar said in his remarks that the talks should lead to an Islamic system where all Afghans see themselves as part of.

The intra-Afghan negotiations were laid out in a peace deal Washington signed with the Taliban on Feb. 29. At that time the deal was touted as Afghanistan's best chance at peace in 40 years of war.

Abdullah noted that since that agreement was reached, 1,200 people have been killed and more than 15,000 wounded in attacks across the country.

Current talks had been originally expected to begin within weeks of the signed agreement between the Taliban and the US.

But delays disrupted the timeline. The Afghan government balked at releasing 5,000 Taliban prisoners, which was stipulated in the deal as a sign of good faith ahead of the negotiations. The Taliban were required to release 1,000 government and military personnel in their custody.

Political turmoil in Kabul further delayed talks as Afghan President Ashraf Ghani and his rival in controversial presidential polls the year before, Abdullah Abdullah, squabbled over who won, with both declaring victory.