Social
News ID: 3472650
TEHRAN (IQNA) – More mosques in Malaysia are urged to take part in the Green Mosque program which focuses on water and electricity saving and recycling. 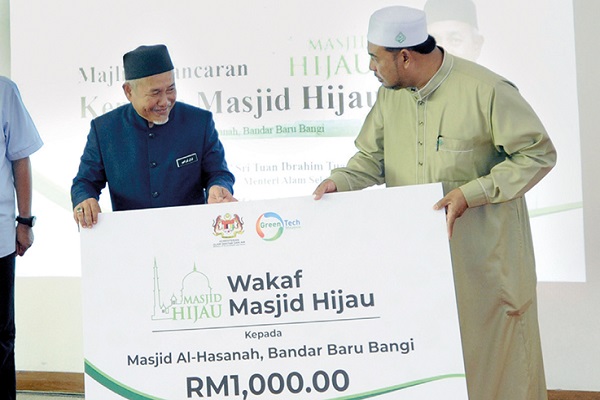 Malaysia Green Technology and Climate Change Center (MGTC) CEO Shamsul Bahar Mohd Nor said the program will lead to electricity and water saving among mosques for a dynamic environment.

He said this will also allow mosques to cut costs, ultimately benefitting all parties.

“MGTC also encourages companies to apply for the Green Technology Financing Scheme (GTFS) with an allocation of RM2 billion to take part in the Green Mosque program.

“For example, a company that wishes to install a solar panel, which can save 40% on electricity bills, can apply for GTFS and enjoy a 2% interest-rate reduction,” he told reporters.

MGTC advises companies to discuss with the mosque’s management team to find the right option for them.

The two-year scheme offers a 2% interest or profit rate subsidy for the first seven years with 60% government guarantee on the financing.

This bilateral agreement marks the mosque as the program pioneer, where it aimed at inculcating green lifestyle values to mosque and surau goers.

“It is in line with the value of nature-loving, which is highlighted in the Quran.

“As dakwah centers, it is a good start to have mosques and surau as the drivers of green lifestyle,” he added.

Tuan Ibrahim said his ministry is also engaging the Housing and Local Government Ministry to implement this element in other buildings in the future.

“We start with mosques because this is where the communities gather.

“There are already a few mosques in Kelantan that have installed solar panels and I believe there are more to come,” he said.

Last Friday, MGTC presented a contribution worth RM1,000 to Masjid Al-Hasanah through the Green Mosque Wakaf initiative for its activities and improvement programs related to carbon-reduction efforts.