General
News ID: 3472843
TEHRAN (IQNA) – Dozens of settlers on Thursday stormed the courtyards of the blessed Al-Aqsa Mosque, under the protection of the occupation forces, and performed Talmudic rituals there. 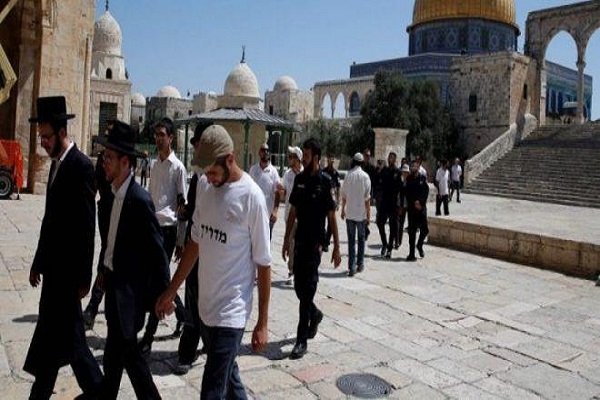 The Islamic Endowments Department reported that 29 settlers stormed the Al-Aqsa Mosque and wandered around its courtyards, especially in the eastern region of the mosque, under the protection of the heavily armed special occupation forces.

The Jerusalem al-Quds Endowments indicated that the incursions started from the Mughrabi Gate, one of the doors of the mosque, to the Bab al-Rahma chapel, and to the Bab al-Silsila Gate, during which Talmudic rituals were performed.

It indicated that settlers storm the Al-Aqsa courtyards daily from Sunday to Thursday, during the morning rounds and last for three and a half hours, and in the second 'evening' rounds, which last for one hour, menafn.com reported.

The settler incursions came as the occupation forces hindered worshipers from reaching Al-Aqsa Mosque who live outside the Old City, and the identities of some of its visitors are kept at the gates.