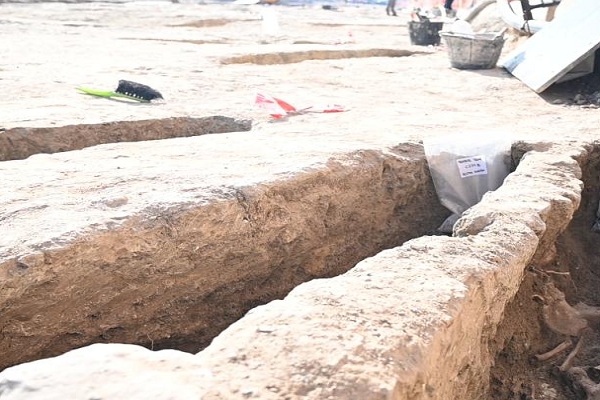 More than 400 graves have been unearthed in Tauste municipality, near Zaragoza city. The number of unearthed graves was 40 in 2012-13, archaeologists said.

They added that the numbers could go as high as 4,500 if the excavations were to continue.

Javier Nunez Arce is the head of El Patiaz Cultural Association, whose purpose is to discover, preserve and spread the heritage, culture and idiosyncrasies of the ‘Villa de Tauste’. He told Anadolu Agency that they knew there used to be a cemetery in the town but did not know its origins.

The excavations in Tauste began in 2010, when the first remains were discovered during construction of a new home for a local. Nunez Arce said they realized the graves were Muslim graves because the skeletons were facing Mecca, in line with Muslim traditions.

After archeologists examined it in detail, they discovered that the bell tower of the Catholic church (Santa Maria tower) was also a conversion job from a minaret.

“When the wall enclosing the church around the base of it was built, the tower already existed,” says the El Patiaz website, positing that the bell tower, previously believed to be from the late 13th century, used to be a minaret from the ninth century AD, predating the rest of the church.

“Therefore, it is clear that a Muslim community with a mosque used to live in this town,” Nunez Arce added.

Written in Islamic calligraphy, the minaret appears to have the phrase "There is no deity but God", one of the tenets of Islam.

With the discovery of the largest Islamic cemetery dating back to the ‘Umayyad’ era in the eighth century AD, local authorities have sped up their excavation efforts.

According to the authorities, examining the remains found in the cemetery leads to an important and rare discovery that reveals a Muslim community lived in Tauste from the eighth to the twelfth century AD.

AA reports that the local government in Aragon has decided to remove all graves on the main street, as they plan to build an underground infrastructure there.

Nunez Arce also said they already knew that bones and skulls appeared sometimes after heavy rain and storms in the region, but they did not know their origins before the excavation.

Archaeologists are still studying the graves and examining the 20,000-metre archaeological site.

According to Eva Jimenez, director of the excavation team, the remains found in the Muslim graves will be taken for genetic and DNA testing before being transferred to the museum. Jimenez added that there is another project being explored, which is to bury the remains in Tauste municipality, as they are citizens and part of its heritage and culture.