General
News ID: 3474276
TEHRAN (IQNA) – The 78th edition of an online international webinar was organized on the birth anniversary of Imam Hussein (AS), Hazrat Abbas (AS) and Imam Sajjad (AS). 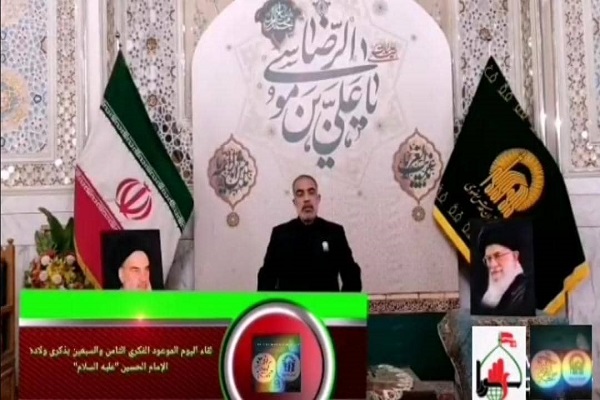 The Imam Muntadhar International Society held the program in cooperation with the Astan (custodianship) of Imam Reza (AS) holy shrine, the Astans of the holy shrines in Karbala and Kadhimayn cities of Iraq and the Ashura International Foundation.

Addressing the webinar, Habib Bulough, director of the society, congratulated the auspicious occasions and talked about the status and virtues of Ahl-ul-Bayt (AS).

The program continued with Tawasheeh performance and eulogy recitations by Mohammad Parsa, a servant of Imam Reza (AS) holy shrine.

Also addressing the program was Ayatollah Sheikh Mohsen Heidari, a member of Iran’s Assembly of Experts, who elaborated on the status of Imam Hussein (AS) in Nabawi Hadiths.

He also talked about the philosophy of Imam Hussein’s (AS) uprising, noting that it was based on the principles of Islam to fight the tyranny of the Umayyad dynasty and their deviated thought.