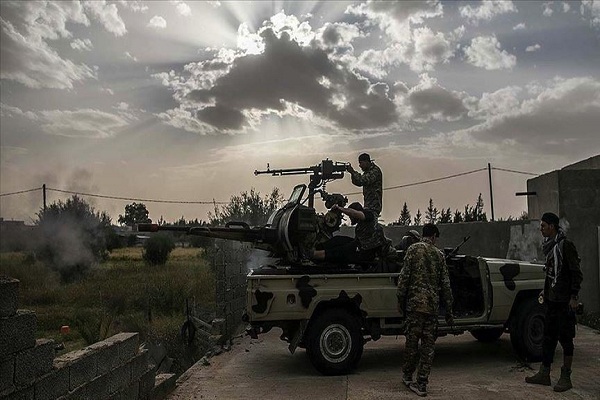 Representatives of Libya's interim government will join the foreign ministers of regional and global leaders at the UN-sponsored talks.

Most of the attendees – the five permanent members of the UN Security Council, namely the US, UK, France, Russia and China – as well as Italy, Turkey, the United Arab Emirates, the EU and the UN already met at the first Berlin Conference on Libya in January 2020.

Ahead of the talks, host German Foreign Minister Heiko Maas reminded participants of pledges made in 2020 for an end to international meddling and for foreign militants or troops to withdraw.

"Those who promised to withdraw last time in Berlin have not kept their word," said Maas in an interview with Die Welt daily.

"But for the Libyans to determine the fate of their country again, the foreign forces must leave. The transitional government has also made that clear," he stressed.

The UN estimates that 20,000 foreign fighters and mercenaries are still on Libya's territory. And that presence is seen as a threat to the UN-backed transition leading to the elections.

The oil-rich country descended into chaos after dictator Muammar Gaddafi was toppled and killed in a 2011 NATO-backed uprising, resulting in multiple forces vying for power.

In recent years Libya has been split between two rival administrations backed by foreign forces and countless militias.

In October, after Turkey-backed forces of the Government of National Accord (GNA) based in Tripoli routed those of eastern military strongman Khalifa Haftar, the two camps agreed a ceasefire in Geneva.

Following the collapse of Haftar's offensive, military and political figures in the east and west negotiated a resumption of oil exports.

Meanwhile, the UN selected 75 Libyans to hold political talks on a roadmap. They agreed to replace the two rival administrations with an interim government to oversee the run-up to elections set for December 24.

The participants eventually selected a three-man presidency council headed by Mohammed al-Menfi, with Abdulhamid Dbeibeh as prime minister in a process publicly backed by all the international stake-holders.

The security situation in Libya has been slowly improving since.

However, the UN recently warned that progress has stalled, notably on a key requisite of the polls – the pullout of all foreign soldiers.

Western leaders have repeatedly called on the foreign fighters to depart.

But mercenaries supporting Haftar's side in the east of the country are still in place.

Turkey meanwhile has troops in Tripoli, which it argues were sent under a bilateral agreement with the government, implying that they are not affected by a request for foreign troops to leave.

But any withdrawal is also a delicate balancing act, said the German foreign minister.

"Foreign forces must leave the country in a gradual and uniform manner, so that there won't be a sudden military imbalance that could be used by one side for a sudden offensive," said Maas.

A diplomat, speaking on condition of anonymity, stressed the sensitivity of the situation, saying solutions could not be found overnight.

But he also voiced cautious optimism that some progress could be made on Wednesday, because it was in no one's interest for conflict to break out again.

Jalel Harchaoui, Global Initiative senior fellow and an expert on Libya, also believed the talks could bring tangible help on the upcoming elections.

"Somebody could come up with a good idea of agreeing on a constitutional basis in July and be on course for elections in December," he said, referring to a key requisite for the polls.

"I think there's a good chance (for elections by year's end) and the Berlin process could help."