General
The link was copied
News ID: 3475678
TEHRAN (IQNA) – Louvre Abu Dhabi has announced its second international exhibition of 2021, Dragon and Phoenix – Centuries of Exchange between Chinese and Islamic Worlds, which will run from Oct. 6, 2021 until Feb. 12 2022. 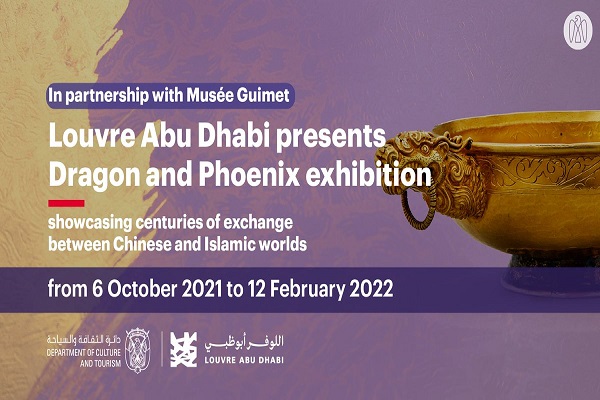 Organized by Louvre Abu Dhabi in partnership with Musée national des arts asiatiques – Guimet with the support of France Muséums, the exhibition will showcase the cultural and artistic exchange between the Chinese and Islamic civilizations from the 8th to the 18th century.

Visitors will be able to explore cultural connections through more than 200 artworks from the collections of Louvre Abu Dhabi, the Musée Guimet and 12 international museums and institutions, alongside a wide-ranging cultural program.

Dragon and Phoenix places in dialogue artifacts from two worlds rich in culture, arts, and sciences: China (the dragon) and the Islamic world (the phoenix).

The exhibition showcases the connections, artistic influences and remarkable untold stories of more than 800 years of exchange through land and sea trade routes, from the establishment of the first Arab merchant colonies in Canton in the 8th century until the beginning of the 18th century.

Journeying from the Mashriq and the Arabian Peninsula through Central Asia and the Indian Ocean, and to China and Vietnam, the exhibition reveals a long and rich history of mutual admiration and influence reflected in both material and immaterial exchanges.

With both a physical exhibition at the museum and an online experience, it will shed light on how centuries of cultural exchange and the prolific artistic production between the two worlds reveal a dominance of coveted luxury materials and artworks between the 8th and 18th centuries.

“Given Abu Dhabi’s location as a historical and ongoing crossroads for trade, art and culture, it seems especially fitting that this exhibition is being held here at Louvre Abu Dhabi."

Manuel Rabaté, director of Louvre Abu Dhabi, said, "Dragon and Phoenix — Centuries of Exchange between Chinese and Islamic Worlds continues our mission of narrating stories of cultural connections, exploring exchanges between the Chinese and the Islamic worlds through the prolific artistic production of these cultures."

Sophie Makariou, president of Musée national des arts asiatiques – Guimet, said, "This exhibition tells the story of two civilizations — the Islamic and ancient Chinese worlds. The long history of exchange between these two cultural centers began in the aftermath of the Qur’anic revelation, with the establishment of Damascus, and continued unabated after the formation of the Islamic caliphate.

“Until the 15th century, the trade routes, coined by Ferdinand von Richtofen as ‘The Silk Road’, were arduous but essential conduits of exchange between people, ideas, culture and products. Dragon and Phoenix — Centuries of Exchange between Chinese and Islamic Worlds tells the stories of these cultural exchanges which took place over eight centuries."

Dr. Souraya Noujaim, Scientific, Curatorial and Collections Management Director at Louvre Abu Dhabi, said, "The exhibition reinforces the role of Louvre Abu Dhabi in highlighting transcultural relationships as well as the need to adopt novel approaches in the field of historical research.

“For nearly a thousand years — from the 8th century to the threshold of the 18th century — these two cultures were entwined through trade, scientific curiosity, and artistic production. Each observed and inspired the other. Our story of mutual influence and inspiration ends deliberately at the cusp of the 18th century, when alternative models with a radically new aesthetic appeared."

With more than 200 artifacts spread across five sections the first four following a historical timeline, and the fifth focusing on literary traditions of calligraphy and poetry Dragon and Phoenix showcases this history of a fluid global context of artistic and cultural exchanges in earlier times.

The cultural program for Dragon and Phoenix is a sensory journey across the narrative of the exhibition and will present a variety events and projects including a hand-picked selection of weekend film screenings and Dragon Boats as a new seasonal offering, in addition to the current yoga and kayaking activities at the museum.