Social
News ID: 3480037
TEHRAN (IQNA) – More than 50 volunteers from the Islamic Cultural Centre of Italy and Volunteer Ministers of the Church of Scientology cleaned up the streets ending to the Great Mosque of Rome in late July. 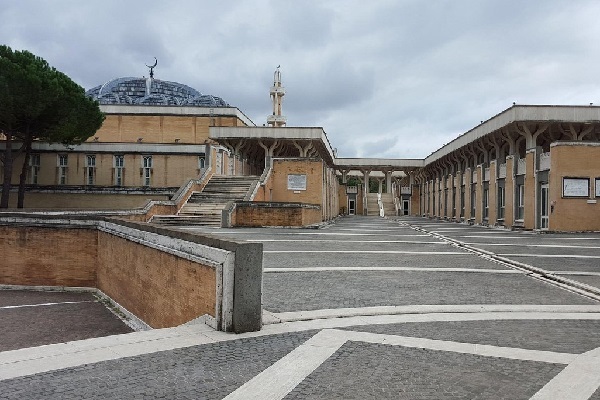 The Great Mosque of Rome (Italian: Moschea di Roma), is the largest mosque in the western world in terms of land area. It has an area of 30,000 m2 and can accommodate more than 12,000 people. The building is located in the Acqua Acetosa area, at the foot of the Monti Parioli, north of the city. It is also the seat of the Italian Islamic Cultural Centre (Italian: Centro Culturale Islamico d’Italia).

In addition to being a meeting place for religious activities, it provides cultural and social services variously connecting Muslims together, while also holding teachings, wedding ceremonies, funeral services, exegesis, exhibitions, conventions, and other events.

The mosque was jointly founded by the exiled Prince Muhammad Hasan of Afghanistan and his wife, Princess Razia[3] and was financed by Faisal of Saudi Arabia, as well as by some other states of the Muslim world. The opening ceremony was led by Pope John Paul II.

Its planning took more than ten years: the Roman City Council donated the land in 1974, but the first stone was laid only in 1984, in the presence of the then President of the Italian Republic Sandro Pertini, with its inauguration on 21 June 1995.

On July 23rd 2022, the day of the joint operation between followers of Islam as well as followers of Scientology, over 12 cubic meters of all kinds of trash were collected.

Brambles and shrubs that impeded pedestrian transit on the pedestrian walkway were removed, as well as weeds, brushwood and trash of various kinds. The material was collected and closed in plastic bags, which were collected at the end of the intervention by the operators of the Municipal Environment Agency (AMA).

The success of the project was made possible thanks to the support of the Department of Agriculture, Environment and Waste Cycle of Roma Capitale and the cooperation of the AMA.

“It was a day that required great commitment from all the volunteers, also due to the overwhelming heat, but the final result richly rewards us in terms of the environment returned to the citizens,” said Elena Martini, spokesperson for the Church of Scientology in Rome.

Dr. Nader Akkad, Imam of the Grand Mosque of Rome, highlighted the importance of the initiative of the two faiths involved: “It is a collaboration that carries forward a common project, both of fraternity and friendship and with a common goal, that of caring for the environment.”

“Religions have a very important task, to create fraternity, to create a common space of friendship,” continued Dr. Akkad; “Nowadays, it is very important for religious faiths to cooperate together for the collective good, and certainly one of the best ways to do this is to take care of the environment, the people and the relationships of those people who co-inhabit this environment.”

Satisfaction with the result achieved with the project on Saturday 23rd in the area of the Great Mosque of Rome has further motivated the leaders of the Islamic Cultural Centre of Italy and the Church of Scientology to follow up the project with future initiatives to be decided also together with public authorities for a better service to the community.