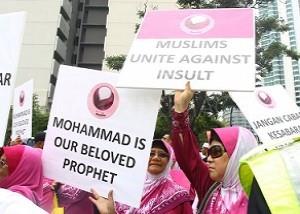 "The recent provocateurs attempt to Insult the Prophet Muhammad (Peace Be Upon Him) in West Watford is absolutely unacceptable,” Numan Majeed, who runs an accountancy business based in Queens Road, told Watford Observer on Friday, May 23.
"Watford’s Muslim Community amounts to several thousand and are part of the towns landscape. We are descendants of immigrants from the 50s and 60s, majority of the second and third generations were born in the town and it is the place we call home.
"The Watford Muslim community contributes positively to the fabric of the town, bringing cuisines from various different continents with the variety of restaurants, businesses that employ people from the town and the many who are employed in the public sector, providing invaluable services."
Earlier this week, a series of hand-drawn posters were put up around West Watford announcing a draw Prophet Muhammad day.
The posters, which also carried slogans such as "death to those who insult free speech", appear to be linked to a campaign that started in 2010 relating to the censorship of an episode of the cartoon South Park.
Though angered by the hateful posters, Watford Muslims tried to remove the posters quietly from the streets to avoid making a fuss over them.
Yet, the issue was highlighted in a heated exchange between Phil Cox, the UK Independence Party Watford mayoral candidate, and Liberal Democrat mayor Dorothy Thornhill.
According to the paper, Thornhill linked the rise of UKip party with growing anti-immigration sentiment and posters, which went up around West Watford at the weekend.
Phil Cox, the UK Independence Party mayoral candidate, later accused the mayor using the posters for "political ends".

No Right to Abuse
As police launched its investigations to reach the anonymous planner of the posters, Majeed, a founder of the Watford Muslims Facebook page, said that freedom does not mean the right to abuse others.
"As a community, we are peaceful, open minded and unfortunately due to the misinformation from some politicians and media outlets, we are misunderstood,” he said.
"We hold beliefs that are dear to us, which we are happy for people to question, debate, discuss and disagree but not insult.
“Surely, a civilized, mature community cannot be proud of elements that seek to insult, ridicule what others hold sacrosanct? Surely freedom cannot mean the right to abuse? If it does with no consideration for others, is that humane?" he added.
Western media has allowed repeated insults of Prophet Muhammad (PBUH).
In September 2012, massive protests swept the Muslim world over a US-made film insulting Prophet Muhammad (PBUH).
Scores of people were killed in the protests against the film titled “Innocence of Muslims”, which was produced by a California man convicted of bank fraud.
The insulting material, which was promote by anti-Quran pastor Terry Jones, has also caused strain between the Muslim world and the West over the freedom of expression.
A French magazine has also published insulting cartoons of the prophet on the pretext of freedom of expression.
Insulting the Prophet is considered blasphemous in Islam.
In September 2005, a Danish newspaper published 12 drawings, including one showing a man described as Prophet Muhammad (PBUH) with a turban in the shape of a bomb and another showing him as a knife-wielding nomad flanked by shrouded women.
The reprint of the controversial drawings by European papers strained Muslim-West ties.
The crisis prompted Muslims in Denmark and worldwide to champion local campaigns to wash away widely circulated misconceptions about Prophet Muhammad (PBUH).