General
News ID: 1412358
Bahrainis held a demonstration over a refusal by the Manama regime to hand over the body of a protester killed by security forces. 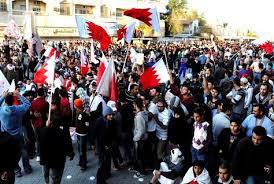 The security forces on Friday fired tear gas to disperse the demonstrators in the village of Daih near the capital, Manama, Press TV reported.

Abdul-Aziz al-Abbar died over a month ago after 50 days in a coma due to injuries sustained in an attack by security forces.

Since mid-February 2011, thousands of pro-democracy protesters have held numerous demonstrations in the streets of Bahrain, calling for the Al Khalifa family to relinquish power.

In March 2011, troops from Saudi Arabia and the United Arab Emirates were called in to assist the Bahraini regime in its crackdown on peaceful protesters.

Scores of people have been killed and hundreds of others injured and arrested in the ongoing crackdown on peaceful demonstrations.

On May 23, Amnesty International urged Bahraini authorities to launch an impartial investigation into the death of the teenage boy. The group also called on Manama to investigate all cases of torture, ill-treatment and deaths that occurred during protests and in custody.

Amnesty says Manama is whitewashing the cases in which the security forces were accused of killing protesters.

In its latest report on Bahrain, Human Rights Watch lashed out at the Manama regime’s justice system, describing it as “criminal” and censuring its “failure to deliver basic accountability and impartial justice.”