Islamic Republic of Iran, Flag-bearer of Quranic Activities in World

General
News ID: 1412367
Head of Iran's Awqaf and Charity Affairs Organization said the Islamic Republic is the flag-bearer of Quranic activities in the world. 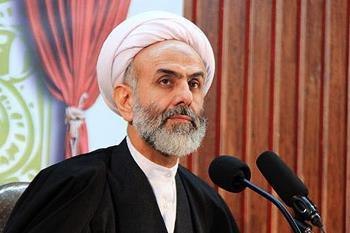 Addressing Friday prayers worshipers in Tehran before the main sermons, Hojat-ol-Islam Ali Mohammadi referred to the 31st edition of the International Holy Quran Competition and said that the main objective of the contest is to promote the Quranic culture.
The 31st edition of the Islamic Republic of Iran's International Holy Quran Competition kicked off in the capital, Tehran, on Monday.
120 reciters and memorizers of the Quran representing more than 70 countries are competing in the contest, which will run until June 2.
The annual competition is held by the Awqaf and Charity Affairs Organization to encourage the public to read the Holy Quran and to act upon the teachings of the Holy Quran.
Hojat-ol-Islam Mohammadi thanked God for giving the Islamic Republic the blessing of hosting the competition.
He referred to the strengthening of Shia-Sunni unity as one of the functions of the competition, saying that while the enemies are working to spread discord and disunity in the Muslim world, the Quran contest of the Islamic Republic serves as a venue where Sunni and Shia brothers from different countries come together and get closer to one another.
The Awqaf and Charity Organization chief also noted that the contest serves to thwart the enemy propaganda aimed at spreading Shiaphobia and Iranophobia.
Elsewhere in his remarks, Hojat-ol-Islam Mohammadi reiterated the development of Quranic activities in Iran since the victory of the Islamic Revolution and said that thanks to the efforts made by the Islamic Establishment, Iranian Quran activists have made major accomplishments in Quranic events internationally.
He went on to say that in order to stand up against the enemies of Islam, the Muslim world needs to take recourse to the Holy Quran.
http://www.iqna.ir/fa/News/1412231