If Muslims Hold Fast to the Quran, Islamic World Will Witness Incredible Progress

General
News ID: 1412392
If Muslims in different countries abandon discord and hold fast to the Rope of God, namely the Holy Quran, the Islamic world will see incredible progress in various areas, a Ugandan Qari said. 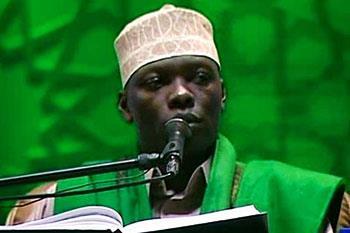 Abdul Basit Muhammad Abdi ,who is representing his country in the 31st International Holy Quran Competition of the Islamic Republic of Iran, added that Muslims ought to remember that they all believe in the Holy Quran and that it should be the basis of Islamic unity.
He further referred to Iran's role in promotion of the Quranic culture and said the organization of the international Quran competition is an indication of the Islamic Republic's successful Quranic endeavors.
Abdi also highlighted the Iranian people's enthusiastic participation in Quran events such as the Quran competition.
Asked about the jury panel of the competition, he said the presence of great masters like Sheikh Ahmed Ahmed Noaina and Ahmed Basyuni along with top Iranian Quran experts in the jury panel has made it one of the best in the Muslim world Quranic contests in terms of expertise and impartiality.
Elsewhere in his remarks, the Ugandan Qari underlined his reverence for the late founder of the Islamic Republic of Iran, Imam Khomeini (RA).
The Ugandan contender in theinternational Quran competition of the Islamic Republic further described Iran as the land of Islam and the Quran.
The 31st edition of Iran's International Holy Quran Competition kicked off in the capital, Tehran, on Monday.
120 reciters and memorizers of the Quran representing more than 70 countries are competing in the contest, which will run until June 2.
The annual competition is held by the Awqaf and Charity Affairs Organization to encourage the public to read the Holy Quran and to act upon the teachings of the Holy Quran.
On the sidelines of this year's competition, a Quranic exhibition is being held in which some 60 booths showcase Quranic works and products.