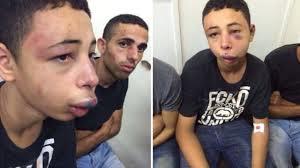 The brutal attack which was first shown on a Palestinian TV channel is said to have happened on Thursday.
The boy’s family is a resident of Florida in the United States. The family of the 15-year old Palestinian-American boy has identified him as Tariq Abu Khdeir, Press TV reported.

Relatives say the boy was visiting his uncle’s house in an area away from clashes between Israeli forces and Palestinians when he and five other youths were attacked in the yard by two masked Israeli police officers.
His family says the teenager has been denied medical treatment since he was arrested and taken into custody.
Some sources say Tariq is the cousin of the 16-year-old teenager Mohammed Abu Khdeir who was recently bundled into a car and later burnt to death by Israeli settlers.
Meanwhile, a prominent American advocacy group says Tariq has suffered serious injuries in the beating and is being held under police guard at a hospital.
Activists have demanded the US officials to intervene with Israel and win his release.
“It is the duty of American officials to intervene and secure the release of an American citizen who was so viciously attacked and denied medical treatment,” the Council on American-Islamic Relations said in a statement.
The group also says the Israeli personnel involved in the incident must be brought to justice.
According to the latest figures revealed by the Palestinian Ministry of Information in Ramallah, Israeli forces have killed one Palestinian kid in every three days for the past 13 years.  Based on the same source, nearly 1,500 children have been killed during the Second Intifada or popular uprising between 2000 and 2013.