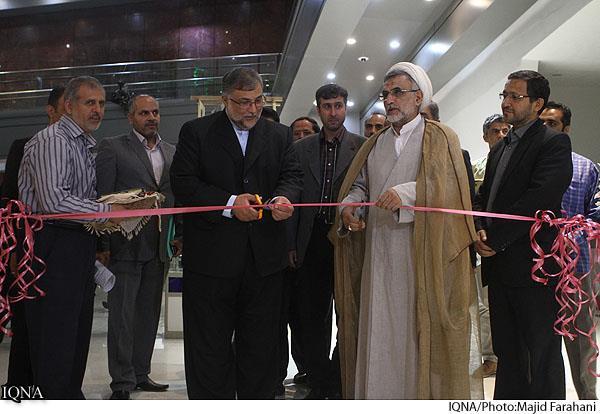 The ceremony was attended by head and cultural deputy of the Islamic Culture and Relations Organization (ICRO), director of the exhibition Hojat-ol-Islam Mohammad Reza Heshmati, and a number of foreign guests and ambassadors of Muslim countries in Iran.
It began with recitation of verses from the Holy Quran by internationally acclaimed Iranian Qari Mohammad Reza Pourzargari, which was followed by several speeches.
In his address, ICRO chief Abuzar Ebrahimi Torkaman referred to the influence of the Holy Book in the life of Iranians and said the influence of the Quran can be found in the literature, culture, arts, traditions and thoughts of Iranians.
"We should thank God that, with the blessings of the Quran, we live in a Quranic country," he added.
Egyptian artists Muhammad Ma'rouf also addressed the opening ceremony of the international section on behalf of all the foreign guests, who included ambassadors of Egypt and Sudan.
The program also included Tawasheeh (religious singing) performances by Tuba and Al-Najm Al-Thaqib groups.
The international section of the exhibit will be running for ten days at the Holy Defense Garden-Museum.
Artworks by foreign artists from 18 countries including Russia, Kuwait, Croatia, Tunisia, Syria, Lebanon, Pakistan, Spain, India, Algeria, and Turkey are on display at the section and scholars from several countries will take part in four forums planned to be held at the exhibit.