General
News ID: 2895946
TEHRAN (IQNA) - French Muslim leaders boycotted a dinner hosted by the country's most prominent Jewish group on Tuesday, February 24, in reaction to its leader accusing young Muslims of being the source of all violent crimes. 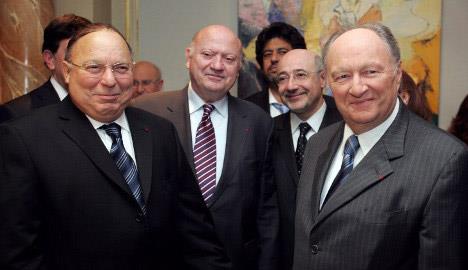 "All violence, and we must say this, all violent acts today are committed by young Muslims," Roger Cukierman, the head of Jewish umbrella group, Conseil Représentatif des Institutions juives de France (CRIF), said in an interview with French radio station Europe 1 earlier on Monday, Reuters reported.
“Of course, that's a small minority of the Muslim community and the Muslims are the first victims.”
To further anger Muslim leaders, he added that the far-right National Front leader Marine Le Pen was "blameless" when it comes to anti-Semitism.
"I think that all of us in the Jewish world are aware that behind (National Front leader) Marine Le Pen - who is blameless on a personal level - there are all the Holocaust deniers," Cukierman said.
His comments came hours before the group’s annual dinner, which was meant to provide a platform for Hollande to highlight his government’s plan to crack down on hate crimes.
Yet, the comments rekindled tensions in a country which is home to Europe's largest Jewish and Muslim minorities.
France is home to Europe's largest Jewish population, estimated to be between 500,000 and 600,000, as well as the continent's largest Muslim population, estimated at around seven million.
Boycott
Angered by the comments, France’s largest Muslim organization, the French Muslim Council (CFCM), announced that it was boycotting the event following comments by CRIF president.
The group issued a statement to condemn Cukierman's comments as "irresponsible and unacceptable" and said it would not attend its dinner.
"I don't think Mr. Cukierman is someone who will contribute to us all living together peacefully," Abdallah Zekri, head of a CFCM department that tracks Islamophobic incidents, told BFMTV television.
The CFCM, said Cukierman, “informed us this afternoon of its decision not to attend the dinner. I learned of this decision with deep regret", he was quoted by France 24.
Speaking at the dinner, Cukierman tried to back-pedal saying he "deeply regretted" Boubakeur's absence, adding he had called him to try and change his mind.
"Jews and Muslims are all in the same boat and I hope that contact will swiftly be re-established," he said.
Source: On Islam