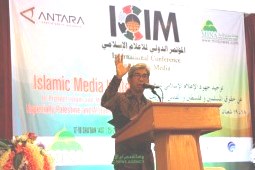 "We have to find solutions to humanitarian issues, including those being faced by Palestine," Fachir stated in his opening remarks at the meeting themed "Islamic Media are United to Protect Islam and its Interests Particularly the Liberation of Palestine and Al Quds."

The deputy foreign minister lauded the ICIM, which is crucial for mainstreaming the Palestinian issue since it has become a global concern that should be echoed persistently.

The media has a crucial role in the struggle for the independence of Palestine, which has been illegally occupied by Israel for over six decades.

The role of the social media is also crucial, he emphasized.

Fachir said the media, in general, and the social media, in particular, were powerful platforms, citing examples of how the social media was partly instrumental in helping Obama become the president and also in the fall of Husni Mubarak of Egypt.

"Here, the Islamic media should strengthen its role in reporting the facts and truth," the deputy foreign minister stated.

Media representatives from Indonesia, Australia, Iran, Kuwait, Lebanon, Libya, the Philippines, Malaysia, Nigeria, Singapore, Sudan, Thailand, Tunisia, Turkey, the United States, and Palestine, among others, are attending the conference, which is being held at Wisma Antara, on May 25-26, according to Agus Sudarmaji of the ICIM steering committee.