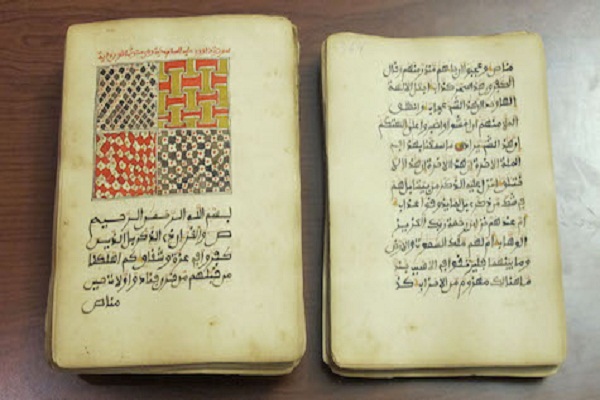 At the request of Oludamini Ogunnaike, assistant professor of religious studies at William & Mary, Swem Special Collections recently purchased a 19th-century handwritten, hand-decorated Quran, the same kind that likely was used by the first Muslims in America—enslaved West Africans of the colonies.

"This manuscript has significance for this area because of the history of enslaved West Africans who were brought to Virginia, a third or fourth of whom were Muslim and would have used a Quran exactly like this,” said Ogunnaike.

The Quran is the first of its kind to be added to Swem Special Collections, though, Ogunnaike notes this isn’t the first time a Quran from this era has found its way to campus: Thomas Jefferson, while attending law school at W&M, purchased and studied a translation of the Quran that’s now housed in the Library of Congress.

Jay Gaidmore, director of Swem Special Collections who purchased the manuscript for the library, notes the value of this artifact to Ogunnaike’s classroom and to the library.

"We are always pleased to acquire materials that support the instructional needs of a professor and encourage professors to bring their students into Special Collections so they can view the rare books and manuscripts that have been collected since the College was founded,” said Gaidmore. "The acquisition of this volume also represents our efforts to diversify our holdings to areas of study beyond Virginia and the South.”

This Quran, which was most likely penned in northern Nigeria, is a rare find for a plethora of reasons beyond its age and artistry. Many details, such as the style of calligraphy and decoration, and variants in language, script and vowel usage, are unique to West African versions of the Quran. The way the manuscript is divided into 60 parts suggests it was used in a way that is also common among West Africans.

"Many Muslims, particularly in West Africa, would try and recite the entire Quran once every month or once every two months,” said Ogunnaike. "So the division of this Quran into 60 parts—you’d read one part every day—indicates that it was meant to be used for continuous recitations and wasn’t just a showpiece.”

Ogunnaike said that having the Quran on campus will be beneficial for teaching purposes. This semester, he plans to take his Introduction to Islam class to Swem to compare the calligraphy—the most central visual art of Islamic tradition—of this Quran with others of enslaved Africans in South America and the Caribbean.

"It’s always great to make things tangible for students, especially when they’re studying something that seems so foreign,” he said.

Beyond the Quran’s use in the classroom, Ogunnaike is interested in studying the unique details—such as hand-drawn symbols, illustrations or notes—of the manuscript to shed more light on its origins for his own research.

"Each scribe brings their own understanding of the meaning of the Quran, so the types of symbols used and what verses they’re used with varies from Quran to Quran,” he said. "Sometimes there will even be notes in the margins with insights or ideas the person had while reading it. It’s fascinating to get a sense of how different people interacted with this text and understood it.”