General
News ID: 3461910
TEHRAN (IQNA) – The Dar-ol-Quran and Sunnah of the Gaza Strip, Palestine, plans to organize a Quran competition for orphans. 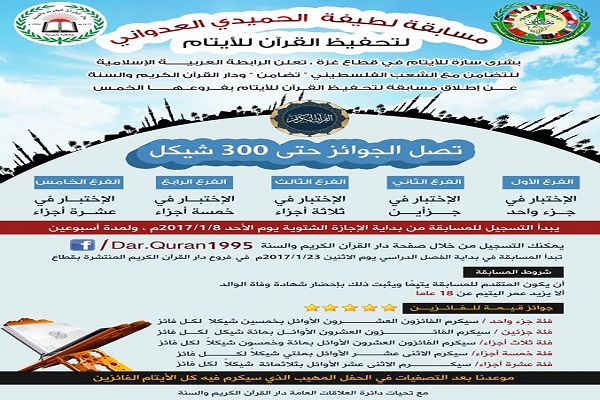 The Islamic-Arabic Society for Solidarity with the Palestinian Nation will cooperate in holding the Quranic event, al-Risala website reported.

Registration for the contest has begun and will continue for two weeks, organizer said.

The preliminary round is slated for January 23 at the branches of the Dar-ol-Quran and Sunnah in different parts of the Gaza Strip.

Those willing to take part in the contest should be below 18 years of age and present a certificate showing their father has died.

The Dar-ol-Quran and Sunnah holds various Quranic programs, including recitation sessions and Quran contests to promote the Quran among the people of the coastal enclave.