General
News ID: 3466292
TEHRAN (IQNA) – Prospective legislative candidates in Lhokseumawe, Aceh, Indonesia, participated in a Quran recitation test on Monday to meet the requirements to run in the 2019 general election. 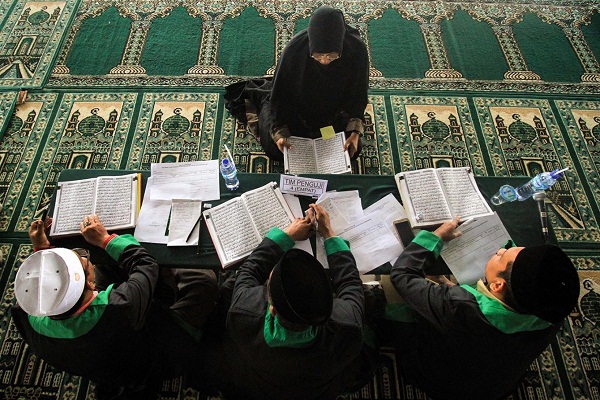 Lhokseumawe Independent Elections Commission member Mulyadi said candidates from six parties -  the National Awakening Party (PKB), the Gerindra Party, the Garuda Party, the Indonesian Democratic Party of Struggle (PDI-P), the Golkar Party, and the NasDem Party - had taken the test on Monday, with more to follow in the next two days.

"Tomorrow [the tests] will continue with candidates from the other political parties, until July 18, as has been scheduled and informed to all the parties participating in the Lhokseumawe elections," Mulyadi said on Monday, as quoted by Antara.

He added that test-takers would be judged on their adab (manners), Tajweed (pronunciation), and clarity in reciting the Holy Book and would be judged by officials from Lhoksemauwe's Quran Recitation Development Institution, Council of Religious Scholars and Religious Affairs Ministry.

Under the 1999 law on Aceh’s special region status, coupled with the 2001 Special Autonomy Law for Aceh and Papua, Aceh is the only Indonesian region that applies sharia.

The region's legal stipulations or Qanun require legislative and regional head candidates to be able to recite the Quran.

There are 575 House of Representative seats up for grabs in 80 electoral districts across the country next year, with a further 19,817 seats are open for contention in 2,478 regional, municipal and regency legislative council electoral districts.