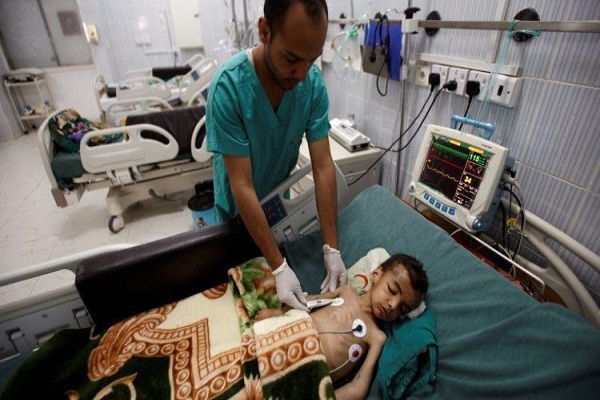 “Over a year after cholera broke out in Yemen, killing more than 2,000 people, the disease is back and spreading fast in … Hudaydah,” said the UN agency in a report on Monday.

The port city has been “a target of continued airstrikes” by the so-called coalition in an attempt “to regain control of the city,” it added, Press TV reported.

Cholera infection first became epidemic in Yemen in October 2016 and spread until December the same year, when it dwindled. The second outbreak began in the Arabian Peninsula country in April last year.

Over 70 percent of all humanitarian aid, and food imports pass through the docks of Hudaydah, which was one of the worst-hit cities in Yemen’s cholera outbreak last year – the worst in the world at its height. The Saudi-led coalition’s current blockade on the city has triggered an unprecedented humanitarian crisis in the impoverished country.

The Saudi-led coalition, which has been waging a war against Yemen since early 2015, claims that the members of the Houthi Ansarullah movement are using Hudaydah for weapons delivery, an allegation rejected by the fighters.

Saudi Arabia and some of its allies launched a brutal war, code-named Operation Decisive Storm, against Yemen in March 2015 in an attempt to reinstall Hadi, a staunch ally of Riyadh, and crush the Houthi movement, which is a significant aid to the Yemeni army in defending the country against the invading forces. It has also been running state affairs in the absence of an effective administration during the past three years.

UNICEF further said in an attempt to mitigate the risks of the new cholera outbreak, on Saturday, it launched a week-long cholera oral vaccination campaign, with the cooperation of Yemen’s Ministry of Health, targeting the most vulnerable 500,000 women, children and men in and around the city.

It added that “other mitigating measures implemented by humanitarian organizations include the continued provision of safe drinking water and sanitation facilities.”

The Saudi-led aggression has also taken a heavy toll on the country's infrastructure, destroying many hospitals, schools, and factories. The United Nations has already said that a record 22.2 million Yemenis are in dire need of food, including 8.4 million threatened by severe hunger.

Several Western countries, the United States and Britain in particular, are also accused of being complicit in the ongoing aggression as they supply the Riyadh regime with advanced weapons and military equipment as well as logistical and intelligence assistance.