General
News ID: 3469228
TEHRAN (IQNA) – Iranian President Hassan Rouhani and members of his cabinet visited the mausoleum of Imam Khomeini (RA) on Saturday, the beginning of the Government Week. 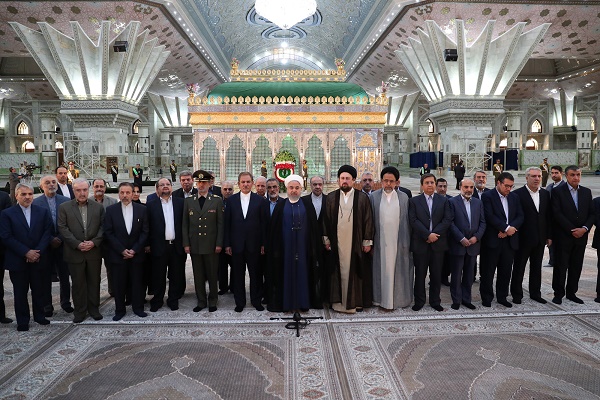 They laid a wreath at the tomb of Imam Khomeini and renewed allegiance with the aspirations of the late founder of the Islamic Republic of Iran.

Speaking at the program, Rouhani said Imam Khomeini, as the architect of the Islamic establishment, showed the path to serving the people and the visit to the mausoleum by the Cabinet members demonstrates the administration’s commitment to this path.

He added that 30 years after the demise of Imam Khomeini, the Islamic Republic founded by him stands strong against enmities and problems.

Rouhani and the cabinet also visited the tombs of former president Mohammad Ali Rajaei and prime minister Mohammad Javad Bahonar, whose martyrdom in a bombing at the Prime Minister Office on August 30, 1981, marks the Government Week.