Iraq Fully Ready to Respond to Any Act of Aggression: PM

General
News ID: 3469268
TEHRAN (IQNA) – Iraq’s Prime Minister Adel Abdul-Mahdi said his country’s armed forces are fully prepared to respond firmly to any act of aggression launched either from outside or inside Iraq. 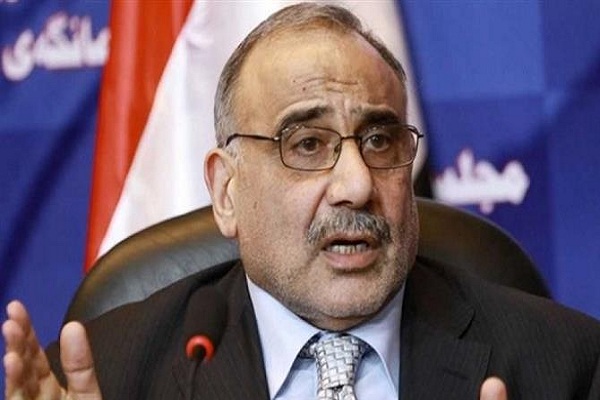 “The prime minister pointed to the high readiness of our armed forces to defend Iraq, its citizens and state institutions in addition to diplomatic missions operating in Iraq. He also stressed the Iraqi forces’ readiness to respond firmly and by all means available to any aggression launched either from outside or inside Iraq,” Abdul-Mahdi’s media office said in a statement released following a cabinet session in the capital Baghdad on Tuesday.

The statement added, “Abdul-Mahdi also touched on the ongoing diplomatic contacts with all neighboring countries besides Arab and regional states as well as the international community in order to explain the position of Iraq and mobilize regional and international support for solidarity with it and its just position and its policy in support of peace and stability.

The cabinet affirmed their support for Abdul-Mahdi's "clear vision in managing the crisis and reassurance of the capabilities of our people and our armed forces and for the significant development in the status of Iraq in its Arab, regional and international environment, and to continue Iraq's clear policy of rejecting escalation and the policy of axes and the use of its territory to attack others."

“Iraq continues to play its influential and constructive role in defusing the crisis that threatens the security of the (Middle East) region and the world and undermines the efforts to fight the Daesh terrorist group…,” it pointed out.

“The Iraqi government reaffirms its full commitment to its constitutional and national responsibilities to defend the security and safety of Iraq, its people and national sovereignty… Any attack on the country’ territory, sovereignty or armed forces is an attack on everyone,” the statement highlighted.

Abdul-Mahdi further noted that “the sensitive situation that Iraq is going through requires acting with wisdom, courage and great concern for the present and future of Iraq and its people, and requires unity of the national ranks in all its political and media activities."

“Iraq reserves the right to take necessary legal and diplomatic measures and through regional institutions plus the Security Council and the United Nations to defend its sovereignty and security by all legitimate means,” he said.

Abdul-Mahdi’s remarks came in the wake of recent airstrikes in the country against the positions of pro-government Popular Mobilization Units (PMU), better known by the Arabic word of Hashd al-Sha’abi.

On Monday, the Spokesman for the Iraqi Ministry of Foreign Affairs said the Baghdad government will take all available diplomatic and legal actions to prevent the violation of Iraq’s sovereignty and territorial integrity.

Earlier in the day, Adel Abdul-Mahdi, President Barham Salih and Parliament Speaker Mohammed al-Halbousi had held a meeting in Baghdad with senior commanders of the Hashd al-Sha’abi to discuss measures aimed at protection of Iraq’s security and sovereignty.

They stated that the latest assaults on Hashd al-Sha’abi positions were meant to marginalize the volunteer forces, and strip them of the role in the fight against the Daesh Takfiri terrorist group.

Also on Monday, Iraq's military said it has launched an investigation into a purported Israeli strike that killed two Hashd al-Sha’abi fighters near the town of al-Qa’im close to the country's western border with Syria.

“An investigation is ongoing now to determine what happened with the strike,” the spokesman for Iraq's Joint Operations Command, Brigadier General Yahya Rasoul, told AFP.

Sayf al-Badr, spokesman of the Iraqi Health Ministry, said in a statement that at least one person was killed and 29 others were wounded in a powerful explosion, which rocked a military base in southern Baghdad on August 12.

An unnamed source from Iraq’s Interior Ministry said an ammunition warehouse exploded inside a federal police military base, named Falcon, in Owerij area near the southern district of Doura.

Arabic-language al-Ahad TV television network reported on July 19 that a drone had dropped explosives onto a base belonging to the Popular Mobilization Units near the town of Amerli, located about 170 kilometers north of the capital, in the early hours of the day, killing at least one PMU fighter and injuring four others.

Video footage broadcast by Iraqi channels showed a blaze burning at the site and plumes of thick smoke billowing. There was no immediate claim of responsibility for the attack.

The Israeli regime has a record of attacking the forces fighting Daesh in Syria.

In June 2018, Hashd al-Sha’abi fighters came under attack in Syria’s border town of al-Hari, in the eastern province of Dayr al-Zawr, as they were chasing Daesh terrorists out of the area.

Both the Syrian government and Hashd al-Sha’abi declared back then that the attack near the Iraqi-Syrian border had been deliberate and could only have been carried out by either Israel or the United States.