General
News ID: 3469772
TEHRAN (IQNA) – The Zionist regime forces re-arrested a prominent Palestinian legislator and senior member of the Popular Front for the Liberation of Palestine (PFLP) in an overnight raid into her home. 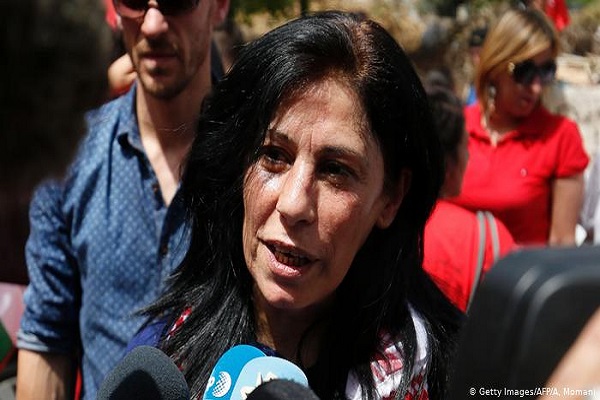 Khalida Jarrar, a 56-year-old member of the Palestinian Legislative Council, was arrested at 3 am local time (00:00 GMT) at her home in the central occupied West Bank city of Ramallah, located 10 kilometers north of Jerusalem al-Quds, and taken to an unknown area, local media reported on Thursday.

Her daughter Yara Jarrar said in a post on Twitter that the house was surrounded by more than 70 Israeli soldiers who arrived in 12 military vehicles.

"Mom and sister were asleep when they approached," Yara said, according to Press TV.

The Palestinian lawmaker has been jailed multiple times. She was released last February after spending 20 months in "administrative detention" -- an illegal practice under which an individual is held without a trail.

According to Samidoun, a Palestinian prisoner solidarity network, she played a leading role in supporting the education of the minor girls held there, organizing classes on human rights and in review for mandatory high school examinations when the prison authority denied the girls a teacher.

Jarrar was last arrested in July 2017, when a large number of Israeli troopers raided her home. Her husband, Ghassan, said Israeli forces also seized her computers during the raid.

Israel's internal spy agency, Shin Bet, later announced in a statement that Jarrar was arrested along with a Palestinian activist for “promoting terror activities,” without providing any further information.

Jarrar is one of the most outspoken critics of the Israeli occupation and has repeatedly slammed the Tel Aviv regime’s atrocities against Palestinians.

The Israeli regime has been denying the lawmaker the right to travel outside the occupied Palestinian territories since 1988. She campaigned for months in 2010 before receiving the permission to travel to Jordan for medical treatment.

In August 2014, Jarrar received a “special supervision order” from the Israeli military, which ordered her to leave Ramallah to live in the West Bank city of Ariha, also known as Jericho.

However, Jarrar set up a protest tent outside the Palestinian Legislative Council in Ramallah, where she lived and worked, until the controversial order was overturned later in September that year.

Some Palestinian prisoners have been held in administrative detention for up to 11 years.