Social
News ID: 3470213
TEHRAN (IQNA) –  India's tourism industry has been hit by a wave of violent anti-government protests across the country against a new citizenship law, with at least seven countries issuing travel warnings. 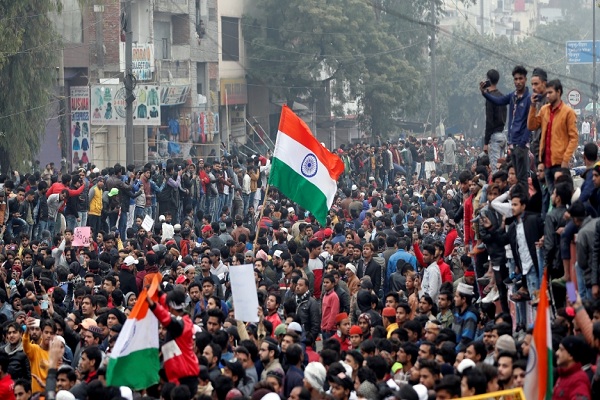 At least 25 people have been killed in clashes between police and protesters, and demonstrations against the Citizenship Amendment Act (CAA), which critics see as anti-Muslim.

The United States, Britain, Russia, Singapore, Canada and Taiwan have issued travel advisories asking their citizens to either refrain from visiting or to exercise caution when visiting regions embroiled in India's protests.

Officials estimate that in the past two weeks, about 200,000 domestic and international tourists cancelled or postponed their trips to the Taj Mahal, one of the world's most popular tourist attractions.

"There has been a 60 percent decline in visitor footfalls in December this year [compared to last year]," said Dinesh Kumar, a police inspector overseeing a special tourist police station near the Taj Mahal who has access to visitor data.

"Indian and foreign tourists have been calling our control rooms to check security. We assure them protection, but many still decide to stay away," said Kumar.

The 17th century marble monument is in Uttar Pradesh, the northern state that has witnessed the highest number of deaths and intense bursts of violence in two weeks of unrest.

A group of European tourists travelling in a group across India said they now planned to cut short their 20-day trip.

"We are all retired folks. For us, travel has to be slow and relaxing. The newspaper headlines have led to a sense of concern and we will leave sooner than we had planned," said Dave Millikin, a retired banker living on the outskirts of London, who spoke to Reuters news agency from the capital New Delhi.

The Taj Mahal, situated in the town of Agra, attracts over 6.5 million tourists every year, generating nearly $14m annually from entrance fees.

A foreign tourist pays 1,100 rupees (about $15) to enter the grounds, although nationals from neighboring countries get a discount.

Managers in luxury hotels and guest houses around the Taj Mahal said last minute cancellations during the festive season have further dampened business sentiment at a time when the country's economic growth has slowed to 4.5 percent, its slowest pace in more than six years.

In a bid to clamp down on violence and unrest, authorities have suspended mobile internet services in Agra.

"Blocking the internet has affected travel and tourism in Agra by about 50 to 60 percent," said Sandeep Arora, president of the Agra Tourism Development Foundation that groups over 250 tour operators, hotels and guides.

Jayanta Malla Baruah, the head of the Assam Tourism Development Corporation, said the state, home to the world's largest concentration of one-horned rhinoceroses, is visited on average by 500,000 tourists during December.

"But this time, due to the ongoing protests and travel advisories by various countries, the number is down by 90 percent, if not more."

Rights groups have decried what they say have been mass detentions and excessive force in the state, where officers have arrested more than 1,000 people.

Al Jazeera's Anchal Vohra, reporting from New Delhi, said no action has been taken against police brutality despite photographs by local and international media of officers hitting people, including minors.

"So far 25 people have been killed, but the police have admitted to only one killing in Bijnor district in the state of Uttar Pradesh. A case has been filed against six policemen but nothing else has been done police atrocities," she said.

"There is a lot of fear among protesters who say that all they are doing is questioning the government's decision on the legislation that they don't approve of, but the response they have from the police officials is unprecedented."

The citizenship legislation makes it easier for members of religious minorities from India's Muslim-majority neighbors - Afghanistan, Bangladesh and Pakistan - who settled in India before 2015 get citizenship but does not offer the same concession to Muslims.

Critics say the law - and plans for a national citizenship register - discriminate against Muslims and are an attack on the secular constitution by Prime Minister Narendra Modi's government.

Modi denies accusations that the law, which eases naturalization procedures for non-Muslim minorities from three nations, is part of a master plan to reshape India as a purely Hindu nation.

But coupled with plans for a national register of citizens, it has stoked fears at home and abroad, including in Washington and at the UN rights office, about the marginalization of India's 200 million Muslims.