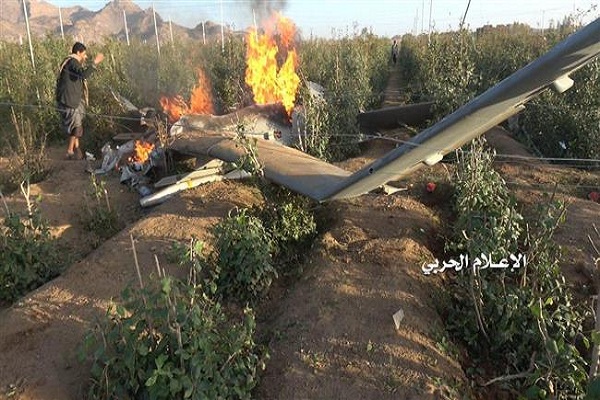 It came less than a week before, another unmanned aircraft with a similar mission was shot in the skies over the southern Saudi border region of Najran.

During past few months, at least nine drones of the same type have been shot down.

On December 1, a surveillance drone belonging to the Saudi-led military coalition was shot down by Yemeni fighters while flying in the skies over the northwestern province of Hajjah.

The media bureau of Yemen's Houthi Ansarullah movement announced in a statement that Yemeni air defense forces targeted the Chinese-built medium-altitude and long-endurance Wing Loong aircraft with a surface-to-air missile on Saturday evening.

The statement added that the drone was struck over Hayran district, according to Press TV.

On October 13, a drone operated by the Saudi-led military coalition was intercepted and targeted while flying in the skies over Yemen's strategic western province of Hudaydah.

The media bureau of Yemen's Houthi Ansarullah movement said in a statement that Yemeni forces shot down the aircraft as it was on a reconnaissance mission over Kilo 16 district.

"Yemen's air defenses have managed to down a Saudi Apache helicopter with a surface-to-air missile using new technology which we will unveil in the near future," Brigadier General Yahya Saree, the spokesman for Yemeni forces announced, adding, "It was shot down this morning in the Majaza area facing [Saudi Arabia's] Asir while carrying out hostile operations."

Saudi Arabia and a number of its regional allies sought to bring the government of Yemen’s Abd Rabbuh Mansour Hadi back to power and crush the Houthi Ansarullah movement when the coalition launched the campaign against Yemen in March 2015.

Nearly five years in, the coalition objectives have not been fulfilled.

The war has claimed more than 100,000 lives so far. That is according to estimates by the US-based Armed Conflict Location and Event Data Project (ACLED), a nonprofit conflict-research organization.