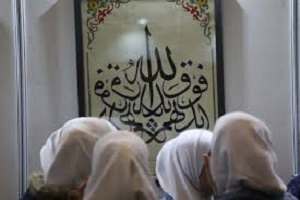 Municipal head of Gaza Yahya Al-Sarraj inaugurated the exhibition which was organized by the Municipality’s Arts and Crafts Village, at the Rashad Al-Shawa Cultural Centre, west of Gaza City.

In his speech, Al-Sarraj stressed the necessity of highlighting Arabic “the language of the Holy Quran”, developing it as required, and emphasizing its beauty and history.

He expressed his happiness that this exhibition is being held at a time when the Israeli occupation insists on destroying Arab history and heritage.

Al-Sarraj went on to thank all of the artists and calligraphers participating in the exhibition for their role in developing the Arabic language and its arts, and their keenness to show the beauty, elegance and originality of this language.

Director of Arts and Crafts Village, Nihad Shaqlieh, said the exhibition hoped to educate the young generation about the importance of the Arabic language and its beauty.

The exhibition included workshops and lectures given by calligraphers from outside the besieged Gaza Strip.