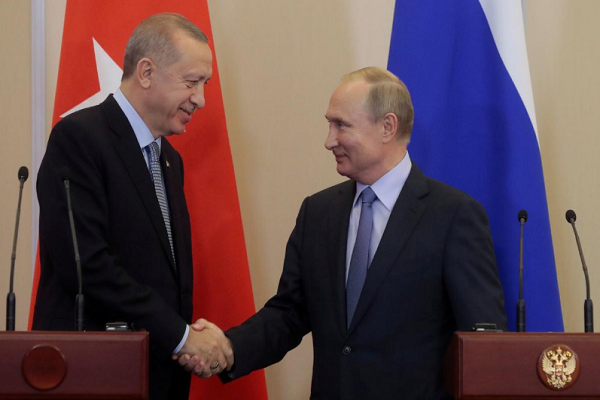 The Kremlin said in a brief readout of the call that Putin and Erdogan had agreed on the importance of implementing Russo-Turkish agreements on Syria and that contacts between Syria and Russia on Syria should continue through the relevant agencies, Reuters reported.

It came after a Turkish diplomatic source said on Tuesday that a Russian team visiting Ankara to discuss the Syrian government offensive in the northwestern Idlib region had left with no apparent agreement on how to halt clashes that killed 13 Turkish soldiers in a week.

On Monday, as Turkish and Russian officials held talks in Ankara, a second attack on Turkish troops in Idlib’s Taftanaz area killed five Turkish soldiers after Ankara’s deployment of thousands of troops to stem the Syrian offensive.

The Russian officials held talks at the foreign ministry on Saturday and agreed to meet again on Monday after failing to reach a deal, Foreign Minister Mevlut Cavusoglu said. They also held talks with an adviser to Erdogan.

In a statement following the meeting, the Turkish presidency said Ankara told the visiting Russian delegation that attacks on Turkish posts in northwest Syria must be stopped immediately and that such assaults will not remain unanswered, Reuters reported.

The Syrian army forces have been advancing rapidly in Idlib, the last major enclave of terrorists and insurgents opposed to President Bashar al-Assad.

Ankara has backed the terrorists, while Moscow and Tehran have supported Assad. Turkey has said it is ready for military action to halt Syrian advances. Moscow and Damascus say they are fighting terrorists in Idlib.