‘Influence of Islam in Politics and Society’ Conference Planned in US

Culture
News ID: 3470835
TEHRAN (IQNA) – The American Council for the Study of Islamic Societies (ACSIS) will be hosting its 36th annual conference on “the influence of Islam in politics and society: civic engagement, social inclusion and political participation” on March 27-28. 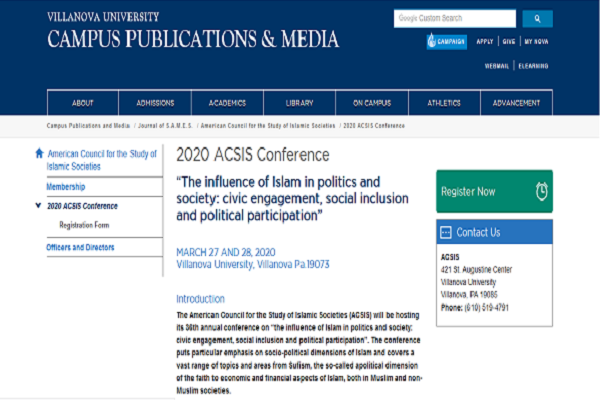 According to the Islamic Research and Information Center, the conference puts particular emphasis on socio-political dimensions of Islam and covers a vast range of topics and areas from Sufism, the so-called apolitical dimension of the faith to economic and financial aspects of Islam, both in Muslim and non-Muslim societies.

The American Council for the Study of Islamic Societies, affiliated to Villanova University, Villanova, Pennsylvania, is a private, non-profit, non-political organization of scholars and other persons interested in the study of Muslim societies throughout the world. Its purpose is to offer opportunities to scholars and the public to study Muslim societies from religious, cultural, economic, social, and political perspectives.