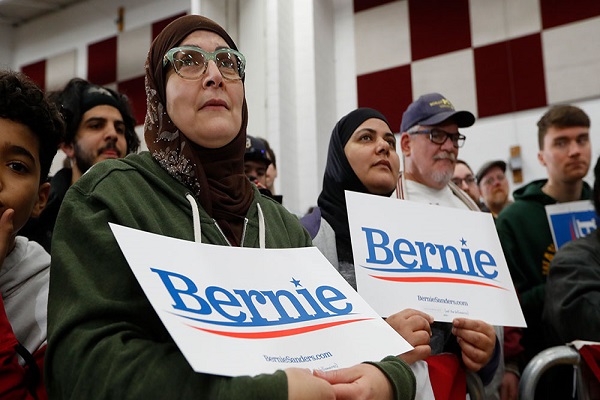 He will be voting for the first time in Michigan after moving from Florida, and plans to vote for Bernie Sanders in Tuesday's Democratic primary.

"It's mostly the socialism aspect of it, how we're all a collective group in America and not one person on his own," he explained. "He really connects with the young generation, even though he's kind of an old guy. You feel like he's a millennial."

Leaning on the counter next to him, his friend Hassan Shoucair was on the fence between Sanders and Joe Biden. He believed both candidates have good ideas and are likeable, but he wanted to vote for a candidate who can beat President Donald Trump in November. Biden, he said, could siphon away votes from Trump.

Shoucair says he is going to a Sanders' town hall Monday evening. "So, we'll see," he said.

Dearborn, outside of Detroit, has one of the largest concentrations of Muslims in the United States, and Sanders enjoys wide support from Muslims here. Dearborn's Arab-American News recently endorsed him, as did Emgage Action, a national Muslim get-out-the-vote group.

Michigan will be a state to watch in November. In 2016, it flipped from Democrat to Republican for the first time in a generation, electing Trump by a margin of only 10,000 votes.

Hillary Clinton was expected to sweep the Michigan primary in 2016, but Sanders won in a huge upset, thanks in big part to his willingness to denounce Islamophobia and engage with Arab American and Muslim voters. Sanders is using the same strategy in 2020.

But with Biden leading the delegate count and dominating the polls - polls released on Monday showed him with a double-digit lead over the Vermont senator - the stakes could not be higher for Sanders. Michigan has 125 pledged delegates, meaning Sanders could pull into first place if he wins the state. But a loss here would be devastating for him.

Lucky for Sanders, he has a group of tech-savvy millennial Muslims on his side.

On Monday, Lama Alzuh, 31, vice chair of Emgage Action's Michigan chapter, and Nada al-Hanooti, 28, executive director of Emgage Action in Michigan, were working their magic at a kitchen table inside a rented space in a Dearborn strip mall.

The pair was using an app on their laptops to text Muslim voters in Michigan to ask if they are supporting Sanders. The response rate is much higher with texting versus calling. Alzuh clicked the green "send" button as fast as she can. Legally, a human has to send these messages. Al-Hanooti replied when people text back.

The dataset they were using started with Michigan's entire voter list, which they narrowed with an algorithm based on location and common Muslim names. But the data is not perfect, and they have heard from Trump supporters, whom they promptly remove from the list. One person replied, "KAGA 2020!" meaning "Keep America Great Again." Another person said they are voting for Biden, sending a flower emoji. When they got a positive response from a Sanders supporter, they planned to follow up on Tuesday and offer a ride to the polls. By 5pm, they had texted 40,000 people since they started that morning.

"We're not trying to find undecided voters and convince people, we're just trying to get people out to the polls," Alzuh explained.

"I don't think people know how extremely important it is to engage the Muslims in Michigan. Hillary [Clinton] lost by 10,000 votes [in Michigan], and in just 2016 alone, 30,000 Muslims came out to vote in the presidential primary," al-Hanooti said.

There are more than 100,000 Muslim American voters in Michigan, according to Emgage Action, out of an electorate of 2.5 million, and voter turnout among Muslims nationally nearly doubled between 2014 and 2018 in states including Michigan.

"We did do some polling after the 2016 election and we found that about 75 percent of Muslim voters voted Democrat. And 25 percent voted Republican," said Wa'el Alzayat, CEO of Emgage Action.

Al-Hanooti said many Muslim Americans feel the stakes have never been higher following an increase in hate crimes and Islamophobic rhetoric since Trump took office.

"It's terrifying," she said. "Even in Michigan, when I leave Dearborn, I don't feel comfortable telling people my name. I actually fear for my mom when she goes outside of Dearborn because she is a veiled Muslim woman, and a proud veiled Muslim woman."

Al-Hanooti said Trump's policies are contributing to increased Muslim voter engagement. "We're having restaurants invaded by ICE in Dearborn. I've had my interns come up to me and say, my dad's getting deported, what do I do? So, the issues are personal now to us."

Of course, that is not the only issue that matters to Muslim voters in Michigan, explained Sheikh Ibrahim Kazerooni of Dearborn's Islamic Center of America. Like many others, he is supporting Sanders, for many reasons, including his plans for universal health insurance.

Many Muslim voters also want to see candidates with foreign policy goals that tend towards peace instead of interference in other countries, particularly in the Middle East. Nationally, he said, they want to see investments in education and healthcare.

"Every Democratic candidate that I'm aware of has promised to rescind the Muslim ban on day one, so that's really important. It's also important that they agree to support a bill called the No Ban Act, which would end the Muslim ban but it would also amend the federal law so that you can't discriminate based on religion."

Simpson said Trump's policies towards the Muslim community are motivating them to become more engaged in democracy, and even run for office.

"This is a community that is not sitting back while their rights get taken away. If there's any silver lining to this very dark cloud of this administration, it is that renewed sense of purpose and need to engage."