General
News ID: 3471508
TEHRAN (IQNA) – A Toronto-area mosque said it was still able to celebrate Eid on Sunday with a physically distant drive-thru celebration with thousands of congregants. 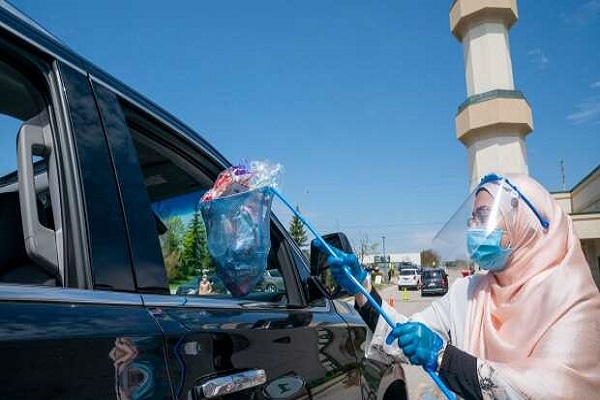 The Islamic Society of North America said roughly 2,000 cars with multiple people inside were able to take part in Mississauga, Ont., where mosque staff handed out gift bags for families.

Eid al-Fitr is an Islamic holiday that celebrates the end of the fasting month of Ramadan, in which people go without food or drink from sunrise to sunset.

Chihab Kaab, chair of ISNA's board, said they had planned to start the event at 10 a.m., but cars had already started lining up an hour early.

He said spirits were high and people were able to enjoy Eid despite the global pandemic.

“It was truly the spirit of Eid and it was the celebration that people needed,” said Kaab.

“There were big smiles from everybody even though there were long lineups in the street.”

Kaab said people had brought cards to show appreciation for the team of people putting on the event.

The mosque also prepared an online video which showed kids how to interact with some of the gifts they were given, such as decorative henna.

There was also a prepared sermon, and then a video explaining how families can do the Eid prayer at home, rather than in a congregational setting.

Mosques around Canada had planned other ways to celebrate the holiday while remaining physically distant, including some that planned to livestream the prayer and sermon.