General
News ID: 3471918
TEHRAN (IQNA) – Intention and motivation play a key role in memorizing the Quran. People may face difficulties in their journey to memories 30 Juzes (parts). However, when there is a will, there is a way. 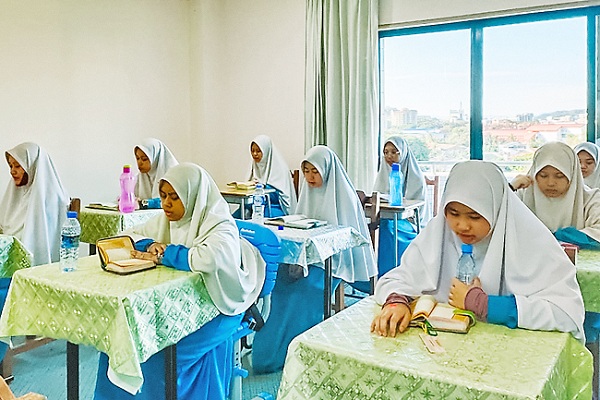 In an interview with the Bulletin, Himesadeja binti Haji Adenan, a former student of Institute Tahfiz Al-Quran Sultan Haji Hassanal Bolkiah (ITQSHHB) in Brunei, who now works as a Quran educator at the same institute shared her experience to be a hafizah (female memorizer).

Himesadeja said her interest in memorizing the Quran began after she was selected as a student of ITQSHHB in 1995, along with 13 female students. They were the first female intake.

She was motivated to be a hafizah by her parents, siblings, teachers as well as Mua’lim and Mu’alimah who are also the hafiz (male memorizer) and hafizah at the institute.

Himesadeja said it is important to be persistent and think of those who put their hopes in you in memorizing the Quran. “You need to do your daily prayers; seek blessings from Allah the Almighty to ease the hafazan (memorization),” she said.

“You also need to look after your food intake as what you eat will affect your hafazan. You need to maintain good manners with the Quran and seek Do’a (supplication) from your parents as their prayers will help your memorization. Memorizing the Quran is unlike memorizing other subjects. There are 114 Surahs, 30 Juzes and 6,236 verses, and you need to memorize each one of them. Therefore you need to set your own goal and focus to avoid being overwhelmed.”

Himesadeja said there are several techniques in memorizing the Quran. Learning the tajwid – a set of rules on the Hijjaiyyah (Arabic alphabets) and understand the meaning of the verse will help with the memorization.

“After that, you need to focus on which Juz you want to start. Reciting the verse several times will help your memorization.

“You need to have a clear goal. If you want to complete within the period of three years, then the efforts must be in line with your goal. Make the habit of your hafazan as your daily routine.”

Himesadeja has been selected several times to represent Brunei Darussalam for local and overseas Al-Quran memorization competitions. Among her achievements include participating in Al-Quran Memorization Competition in conjunction with Nuzul Al-Quran for three years in a row when she was a student at ITQSHHB; emerging second place for the 20 Juzes Al-Quran memorization during the Musabaqah Al-Quran Carnival in 2010 in Malaysia; and becoming a trainer for ITQSHHB students representing the Sultanate for overseas competition.

She believes that children should be encouraged at a young age to memorize the Quran. “We need the young generation to love Al-Quran so that their attitude and character building can be influenced from their effort of memorizing the Quran. “It will support Brunei’s vision to be a Zikir Nation.” As a hafizah, she encourages her children to follow her footsteps. “It is important to encourage children when they are young.

“Once they are interested, it will be easy for them to start their hafazan, even with simple Surah in Juz Amma,” she said. “Aside from teaching them alphabets, parents can introduce their children to huruf hijaiyyah.”

Meanwhile, she said being an educator, she sees challenges faced by students in their hafazan.

“Unlike our time, students nowadays are easily influenced by social media and entertainment. We need to encourage children to practice memorizing the Quran so they will spend their time doing meaningful things in their life.”