General
News ID: 3471963
TEHRAN (IQNA) – Bosnian Muslims marked the 25th anniversary of the Srebrenica massacre Saturday, the worst atrocity on European soil since World War II, with the memorial ceremony sharply reduced as a result of the coronavirus pandemic. 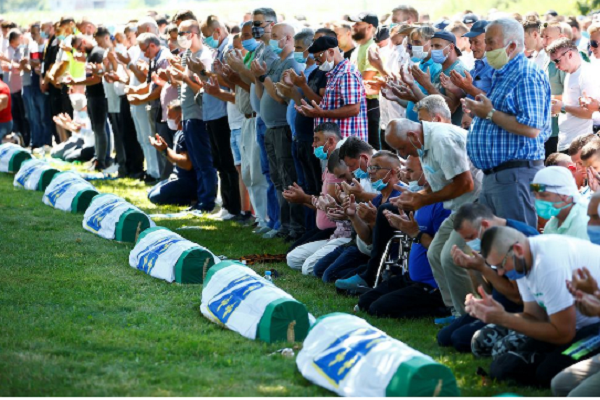 Proceedings got underway in the morning with many mourners braving the tighter restrictions put in place to stem the spread of COVID-19.

At 1100 GMT, a ceremony laying to rest the remains of nine victims identified over the past year began at the memorial cemetery in Potocari, a village just outside Srebrenica that served as the base for the UN protection force during the conflict.

On July 11, 1995, after capturing the ill-fated town, Serb forces killed more than 8,000 Muslim men and boys in Srebrenica in a few days.

Sehad Hasanovic, 27, has a two-year-old daughter — the same age he was when he lost his father in the violence.

“It’s difficult when you see someone calling their father and you don’t have one,” Hasanovic said in tears, not dissuaded from attending the commemorations in spite of the virus.

His father, Semso, “left to go into the forest and never returned. Only a few bones have been found,” said Hasanovic.

Like his brother Sefik and father Sevko, Semso was killed when Bosnian Serb troops led by Ratko Mladic entered the Srebrenica enclave before systematically massacring Bosnian men and adolescents.

“The husbands of my four sisters were killed,” said Ifeta Hasanovic, 48, whose husband Hasib was one of the nine victims whose remains have been identified since July 2019.

“My brother was killed, so was his son. My mother-in-law lost another son as well as her husband.”

The episode -- labelled as genocide by two international courts — came at the end of a 1992-1995 war between Bosnia’s Croats, Muslims and Serbs that claimed some 100,000 lives.

So far, the remains of nearly 6,900 victims have been found and identified from more than 80 mass graves.

Bosnian Serb wartime military chief general Ratko Mladic, still revered as a hero by many Serbs, was sentenced to life in prison by a UN court in 2017 over war crimes including the Srebrenica genocide. He is awaiting the decision on his appeal.

Radovan Karadzic, a Bosnian Serb wartime political leader, was also sentenced to life in prison in The Hague.

The Srebrenica massacre is the only episode of the Bosnian conflict to be described as genocide by the international community.

And while for Bosnian Muslims recognizing the scale of the atrocity is a necessity for lasting peace, for most Serbs — leaders and laypeople in both Bosnia and Serbia, the use of the word genocide remains unacceptable.

In the run-up to the anniversary, Serbian President Aleksandar Vucic described Srebrenica as “something that we should not and cannot be proud of”, but he has never publicly uttered the word “genocide”.

Several thousand Serbs and Muslims live side by side in impoverished Srebrenica, a town in eastern Bosnia with just a few shops in its center.

Yesterday, the town’s Serbian mayor Mladen Grujicic — who was elected in 2016 after a campaign based on genocide denial — claimed that “there is new evidence every day that denies the current presentation of everything that has happened”.

But on Friday, the Muslim member of Bosnia’s joint presidency, Sefik Dzaferovic, said: “We will tirelessly insist on the truth, on justice and on the need to try all those who have committed this crime”.

“We will fight against those who deny the genocide and glorify its perpetrators,” he said at the memorial center where he attended a collective prayer.

In order to avoid large crowds on Saturday, organizers invited people to visit the memorial center over the whole month of July.

A number of different exhibitions are on display, including paintings by Bosnian artist Safet Zec.

Another installation, entitled “Why Aren’t You Here?” by US-Bosnian artist Aida Sehovic, comprises more than 8,000 cups of coffee spread out on the cemetery’s lawn.

“We still haven’t answered the question why they are no longer here,” she told AFP.

“How could this have happened in the heart of Europe, that people were killed in such a terrible way in a UN protected area? Not to mention the fact that the genocide is still being denied.”