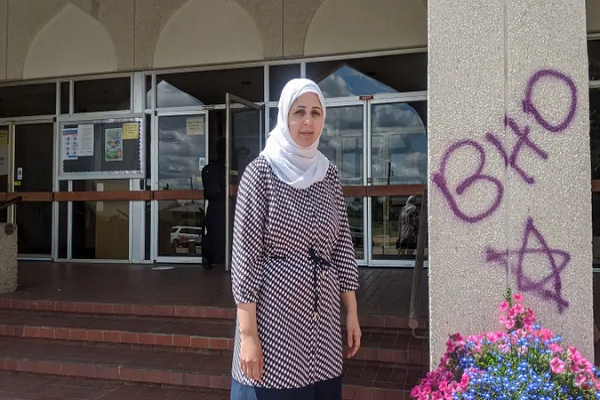 The graffiti at the Al Rashid Mosque was reported Monday and the hate crimes and violent extremism unit is investigating, a police spokesperson said in an email to CBC News Tuesday.

The vandalism — the latest in a string of high-profile incidents at the north Edmonton mosque — has worshippers urging the community to speak out against increasingly bold acts of hatred.

"What we're coming to realize is that there are individuals that are really wanting to create some animosity between fellow Edmontonians," Sadique Pathan, the mosque's outreach imam, said Tuesday.

"We're coming to terms that this is not simply something that's going to pass us by. I think we're going to be facing more and more of this."

Pathan said the vandalism took place around 2:30 a.m. Saturday and was caught on the building's surveillance cameras. The footage, he said, has been shared with police.

Pathan said the mosque has become a lightning rod for hatred and discrimination. White nationalists of all stripes see the building as a symbol of what they hate and fear, he said.

"I think there are some who like to band around an issue of true nationalism.

"They don't accept those who don't share their views. And I think that somehow, the mosque has become a great lightning rod to unite all of them."

One of the images sprayed near the entry doors was "114," a symbol used by white supremacist hate groups.

What Pathan described as an "Aryan star," and an acronym referencing a conspiracy theory that former US president Barack Obama was a practicing Muslim were also painted on the pillars flanking the main entrance.

It's unnerving to see the place of worship targeted, Pathan said.

"There [are] obviously those in the community that have already suffered racism and discrimination so the one place, a safe place, that they look to is a place of worship."

"I think earlier on we just thought that it would just go away. We've come to learn that these movements or these expressions don't move away if you dismiss them.

"I hope that this is something that builds into something even greater than the mosque in that we develop less tolerance for these things ... and we are going to call it out each and every time."

The mosque has been repeatedly targeted. In May, a man recorded himself in a series of videos staking out the mosque. In the videos, he described the Muslim holy month of Ramadan as a "bombathon," and appeared to be monitoring the movements of worshippers while eating a ham sandwich.

In January 2019, security video recorded two men — both with ties to far-right Islamophobic hate groups — enter Al Rashid mosque as worshippers arrived for Friday prayers. The men later got into a confrontation with community members outside and streamed it on social media.

Noor Al-Henedy, communications director for the mosque, said the vandalism comes at a particularly difficult time.

People find comfort in their faith and as the pandemic continues, people need that relief now more than ever.

"It's a very unfortunate event," Al-Henedy said. "Especially right now, it's very disappointing because we are supposed to be coming together to help each other come out of the COVID crisis."

Al-Henedy said she believes the pressures of the pandemic may be feeding hate and discrimination.

Security guards are often present for prayers and large events but Al-Henedy said the mosque is reluctant to clamp down on community access.

"This is a hub for everybody," she said. "It's not a place that you can just close. It's not that simple.

"No community wants to live life that way, where they need to be scared at every corner. And we do believe from the bottom of our hearts that we do have the support of our community."

She said the incident is a reminder that public education about Islam is still needed.

Syed Moiz has been part of the mosque community for more than three years.

Between his daily prayers and regular volunteer work he spends more time at the mosque than he does at home, he said.

The vandalism was senseless and painful, Moiz said. He said it left him feeling violated.

"It's like you come home and see your house was robbed. You see spray paint all over this mosque and it's saddening.

"We all felt it, that sense of sadness."

Pathan said the mosque community has only grown stronger in the face of discrimination.

"Our faith invites us and encourages us to stand for social justice and equality. And in this way we're able to take this on with open arms."