General
News ID: 3472142
TEHRAN (IQNA) – Leader of the Islamic Revolution Ayatollah Seyed Ali Khamenei said the enemy seeks to cut the Islamic Republic’s ties with the resistance forces in the region, but such dreams will not come true. 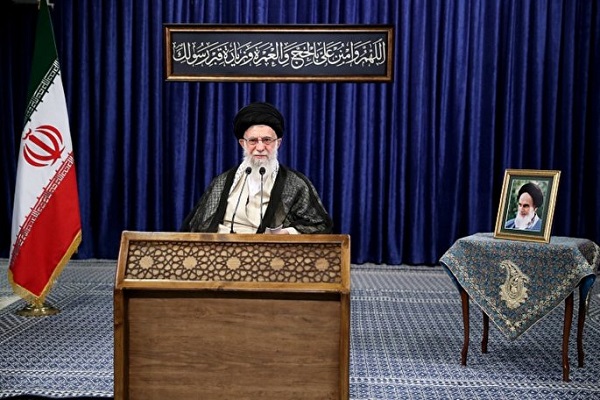 Speaking in a televised speech on Friday on the occasion of Eid al-Adha, the Leader slammed US sanctions on Tehran as “a crime against the Iranian nation”.

“The sanctions applied by the Americans against the Iranian nations are a crime, and there is no doubt about it,” the Leader said

“The sanctions are a crime against a nation; even though it seems to be against the establishment, it is indeed against the entire nation.”

The Leader said surrendering to the enemy is not the way to lift the sanctions. “The only cure for sanctions is rather relying on domestic capabilities.”

“What the US wants is that we totally abandon our nuclear industry, reduce our defensive equipment to one-tenth, and give up our regional power,” he said.

However, the Leader noted, nuclear energy is Iran’s “definite need”, and the nature of the industry has been maintained despite numerous damages Iran incurred because of the 2015 nuclear deal with world powers, officially known as the Joint Comprehensive Plan of Action (JCPOA).

Ayatollah Khamenei said the enemies of the Islamic Republic seek to achieve short-term, mid-term, and long-term goals by imposing sanctions against the Iranian nation.

In the short-term, they seek to impose so much pressure that the nation gets weary, exhausted, and disturbed, so much so that they stand against the establishment, he said, according to Press TV.

“You know that last year they said and this year they say there will be a hot summer – meaning the people should come and stand against the establishment, but they themselves got the hot summer,” the Leader said, apparently referring to anti-racism rallies which have been going on in the US for two months now.

Ayatollah Khamenei said the enemy’s long-term goal is to lead the country and the government into bankruptcy.

However, he added, their dreams will never come true and as a Persian proverb says, “A camel dreams of cottonseed.”

The Leader further pointed to a disinformation campaign, which works hand in hand with the sanctions and includes distortion of the truth and misrepresentation of the realities.

The main purpose of the disinformation campaign is to undermine the people’s morale, and to offer wrong solutions for removal of people’s problems, Ayatollah Khamenei added.

He said the enemies suggest if Iran wants the sanctions removed, it must give in to the US demands. “This is the gist of what they say.”

“Some are influenced [by these words] and exactly repeat what the enemies want, whether regarding the country’s weaknesses or downplaying the country’s points of progress and giving wrong solutions,” he added.

However, he said, this campaign fails to influence the majority of Iranian people, because they have known the enemy and well know that they talk with bias.