General
News ID: 3472305
TEHRAN (IQNA) – The Kenya-Palestine Solidarity Movement in a statement condemned the announced of a deal between the United Arab Emirates and Israel on normalizing ties. 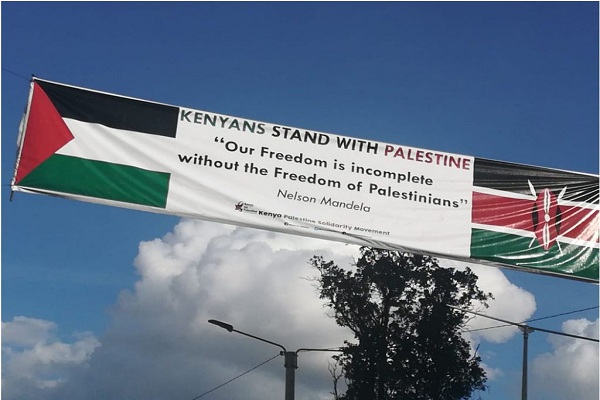 The position taken by the United Arab Emirates is a serious breach of international consensus in support for an end to the Israeli occupation and for rights of the oppressed Palestinian State, the statement read.

The Kenya Palestine Solidarity Movement joins Palestinian and Emirati people and all supporters of the Palestinian struggle for liberation in condemning the declaration on Thursday of an alliance between the despotic rulers of the United Arab Emirates and the Israeli occupation under the auspices of the leaders of the Zionist movement in the US.

After years of secretive and sometimes public relations between the Israeli and United Arab Emirates regimes, the two have finally reached a formal "peace agreement" that paves the way for a strategic relationship between them under the auspices of the Trump Administration. In reality, the agreement is meant to strengthen the two regimes against the people of both countries as well as the wider region. Once signed, and implemented, the agreement will deepen Israel's occupation and be used to strengthen the Arab autocrats who have been perpetrating their own crimes against the people of Yemen, Libya, Syria and Iraq with full complicity of the Israeli, US and several European and Arab states.

At a time that the world is severely concerned with the prolonged Zionist occupation of Palestine and denial of the rights of Palestinians, the position taken by the United Arab Emirates is a serious breach of international consensus in support for an end to the Israeli occupation and for rights of the oppressed Palestinian State.

KPSM joins Palestinians of all walks of society and polity in unequivocally denouncing the Emirati rulers for their betrayal, aggression, and sell out of the Palestinian struggle for freedom. We reiterate our unwavering support for Palestine and urge the African Union and the international community to confront this unholy alliance by any means necessary to end this occupation and address the long suffering of the Palestinian people for good.

We support the call of the Palestinian civil society to people across the globe to escalate boycotts, divestment and sanctions (BDS) campaigns against Israel’s ongoing annexation and apartheid.

In response to the UAE dictatorship’s treason, we call on our sisters and brothers in the UAE to boycott any Israeli presence or activity in the country or elsewhere and to refuse to engage with the Israeli embassy or with entities partnering with them and with all complicit Israeli institutions. We also call on Arabs in general to continue to actively resist this abject normalization by:

Boycotting all activities, festivals and projects sponsored by the UAE regime, including the Dubai EXPO, the Dubai Shopping Festival, as well as sports, cultural and economic/financial festivals and conferences.

Boycotting and divesting from any Emirati or other corporation that becomes complicit in implementing this normalization agreement with Israel.

Refraining from travel to present-day Israel and the OPT, including the al-Aqsa mosque, under this unethical agreement, and from participating in faithwashing initiatives that underpin this so-called “Abraham Accord.”

Real peace will come only after Israel agrees to withdraw from all Arab lands, gives up its expansionist ambitions and its nuclear weapons, and allows for full Palestinian freedom and self-determination in the Palestinian homeland, paving the way for normalization of relations with much if not all of the Arab and Muslim world.