Social
News ID: 3472432
TEHRAN (IQNA) – Muslim groups in Canada are demanding local police do more to keep their communities safe after a string of break-in attempts at Toronto mosques. 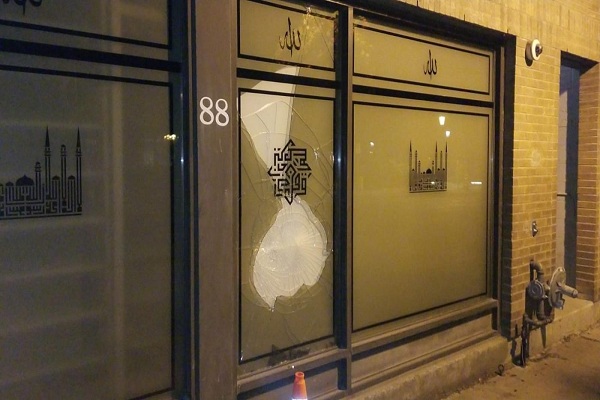 According to the Muslim Association of Canada (MAC), which administers Masjid Toronto and other Muslim places of worship in downtown Toronto, there have been at least six attacks on its mosques in the past three months.

In addition to break-in attempts and racist graffiti sprawled on the mosque's walls, the windows at Masjid Toronto have been broken at least three times in three weeks, with the last attack coming on 16 August, according to MAC.

Toronto police said two arrests have been made and six investigations are currently underway, but a decision to label a 29 July attack an act of "mischief" has stirred outrage among the Muslim community.

"We want to hear from them and we want to see better action because we're frankly very concerned for our community. We're concerned about the staff at the mosque."

So far, MAC says the first four incidents have not been resolved, and the decision to label the fifth as an act of mischief was deeply troubling as they should all be viewed as "acts of hate".

"We are in conversation with Toronto police, but we want action. We don't see the narrative of mischief," said Manaa.

"We want these attacks to be looked at as a series. We want to see where this is coming from."

Canadian politicians, including Toronto Mayor John Tory and Canada's Deputy Prime Minister Chrystia Freeland, have referred to all of the attacks as hate crimes and pressed Toronto police to conduct a full investigation.

"These attacks should be investigated as hate crimes and we strongly encourage the Toronto police to conduct a thorough investigation of these attacks as acts of hate," Jessica Bell, a member of the Ontario parliament, wrote in a letter to Toronto's interim police chief.

Islamophobic and anti-Muslim attacks have surged in Canada in recent years, the most high-profile being the mass shooting at Quebec City mosque in 2017 where a White Canadian man shot and killed six people.

While hate crimes against Muslims dropped by 50 percent in 2018, Islamophobic attacks increased by 155 percent between 2018 and 2019, according to Mustafa Farooq, CEO of the National Council of Canadian Muslims (NCCM).

Farooq told MEE that the police's decision not to refer to the Toronto mosque attacks as hate crimes was "concerning", especially since an officer with Peel regional police in Ontario was under investigation for allegedly sharing Islamophobic posts.

In July, Vice News reported that a 19 year veteran in the Peel police department - who had also run for public office - shared content which insinuated that the victims of the Quebec City mosque attack had ties to terrorism.

"Unfortunately, the Toronto police service does not appear to be treating the incident as a hate attack - which is concerning when you have the mayor and premier saying one thing and you have the police treating it as something else," Farooq said.

"The accused called for the death of [Prime Minister] Justin Trudeau and encouraged the eradication of Muslims," the RCMP said in a statement.