General
News ID: 3472907
TEHRAN (IQNA) – The Israeli military carried out several airstrikes against positions in the central and southern parts of the besieged Gaza Strip. 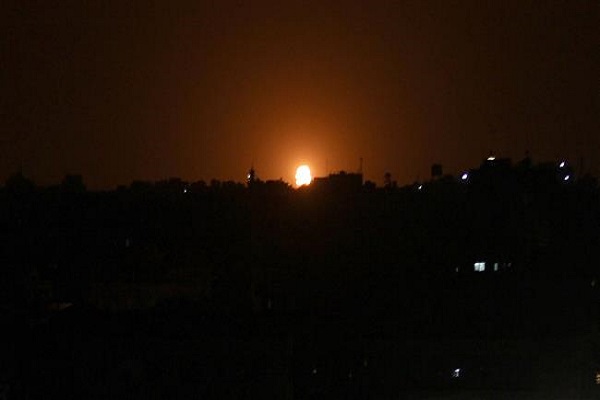 The Israeli army said through a statement that it had stricken two targets belonging to the Palestinian resistance movement of Hamas in the territory on Thursday night.

Russia’s Sputnik news agency cited Palestinian sources as saying that the Israeli aggression targeted a number of facilities belonging to Gaza-based resistance fighters at the al-Nuseirat refugee camp that is located in the central part of the coastal sliver.

Israeli warplanes were also reported to have fired two rockets towards agricultural lands in the town of al-Qarara that is located to the northeast of the southern city of Khan Yunis in Gaza, according to Press TV.

The Israeli regime claimed that the strikes were conducted shortly after two rockets were fired from the blockaded Palestinian enclave toward the occupied territories.

According to Israeli media reports, Israel's Iron Dome missile system had destroyed one of the rockets midair over the city of Ashkelon in the south of the occupied territories.

There have been no reports of casualties from either the alleged rocket strikes or the Israeli aerial assaults.

Israel took the territory under aerial assault earlier in the week too after similarly claiming that it had intercepted a rocket from Gaza.

According to the regime, the attack hit “an underground Hamas infrastructure.”

The subterranean corridors serve to supply Gaza with vital data-x-items in the face of a 2006-present all-out blockade that the regime began enforcing against the enclave in response to Hamas’ rise to power there.

The regime has also been taking the enclave under incessant fire ever since, including three wholesale wars in the 2000s that killed thousands of Palestinians.