General
News ID: 3473366
TEHRAN (IQNA) – The 5th martyrdom anniversary of Nigerian Shia Muslims who were killed in Zaria, a major city in Kaduna State in northern Nigeria, will be held online on December 12. 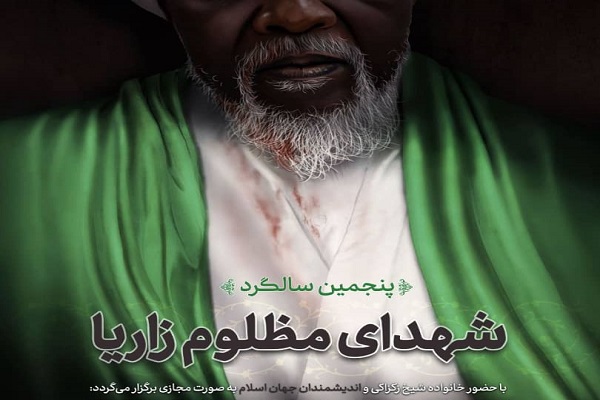 The program will be broadcast live from 6 p.m. local time on IRIB’s TV3, Press TV, Al-Alam, Al-Kawthar, Husa TV and On4 TV.

Some members of top Shia cleric Sheikh Ibrahim El-Zakzaky’s family and a number of intellectuals will deliver speeches in the program.

The committee of commemorating the Zaria martyrs will hold the program in cooperation with Ahl-ul-Bayt (AS) World Assembly, the Society of Seminary Teachers of Qom, Al-Mustafa International University, World Forum for Proximity of Islamic Schools of Thought and Astan of Imam Reza (AS) holy shrine.

The casualties took place in 2015 when Nigerian armed forces violently attacked an annual Ashura mourning ceremony that had been organized by the Islamic Movement in Nigeria (IMN) in Hayin Bello neighborhood of Kaduna.

The IMN, led by Sheikh Zakzaky, said that police had also fired teargas at mourners in the ceremony and vandalized their vehicles.

The Nigerian government has been cracking down on Shia Muslim ceremonies for several years and has also banned the IMN, whose members regularly take to the streets of the capital Abuja to call for the release of their leader.

Zakzaky, who is in his mid-60s, has been in detention since December 2015 after his residence in the city of Zaria was raided by Nigeria’s forces, during which he was beaten and lost vision in his left eye.

During the brutal arrest, three of his sons were also killed, his wife sustained serious wounds, and more than 300 of his followers lost their lives.