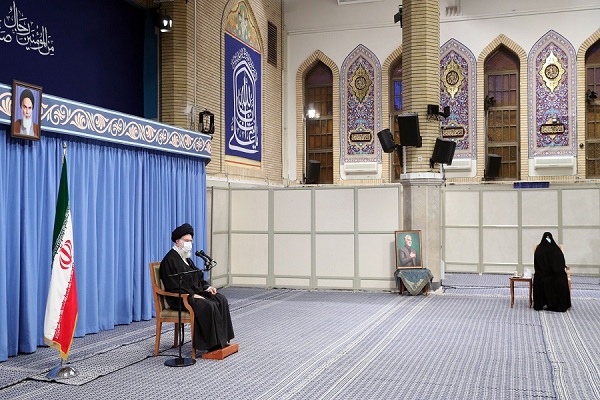 "Martyr Soleimani defeated the Front of Arrogance both during his life and with his martyrdom," Ayatollah Khamenei said on Wednesday.

The following is an excerpt of the statements His Eminence made at this meeting, according to Khamenei.ir:

"Those who ordered the murder of General Soleimani as well as those who carried this out should be punished. This revenge will certainly happen at the right time.

"Millions attending Martyrs Soleimani and Abu Mahdi’s funerals in Iraq and Iran was the first severe slap to the US. But the worse one is overcoming the hegemony of Arrogance and expelling the US from the region. Of course, revenge will be taken on those who ordered it and the murderers.

"Martyr Soleimani defeated the Front of Arrogance both during his life and with his martyrdom. The US President said they spent $7B in the region without achieving anything. The US failed to achieve its goals in Syria and Iraq. The hero behind this major task is General Soleimani.

"The martyrdom of General Soleimani is a historic incident. He is a national hero for Iranians and the Islamic nation. That's why Iranians from different backgrounds - even those least expected - honor him. He was the one who promoted the model of Resistance among Islamic nations.

"Don’t trust the enemy. We saw what the US did under Trump and under Obama against Iran. Hostilities aren't particular to Trump for them to end with him going. Obama was also malicious to the Iranian nation. The 3 European countries have displayed utter malice and duplicity too."