General
News ID: 3474332
TEHRAN (IQNA) – The Zionist-American axis is still seeking to realize its dream of stretching the areas under the Israeli regime’s occupation from the Nile to the Euphrates, Hezbollah Secretary General Sayed Hassan Nasrallah said. 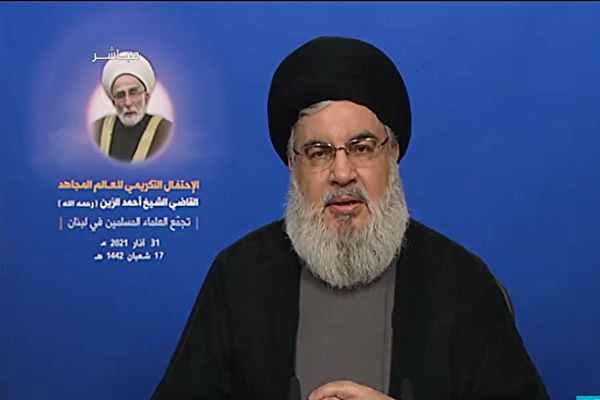 “The axis is still seeking to realize the dream of the Nile to the Euphrates,” Nasrallah said during a televised address on Wednesday.

The occupying regime claimed existence in a hugely Western-supported and -favored war in 1948 by seizing huge expanses of regional territories. It overran other vast swathes of territory in another such war in 1967.

Later, the regime and its Zionist supporters around the world were widely reported to be seeking to expand the territories under its occupation to such a sheer extent that would cover some of the areas lying between the two rivers.

Nasrallah said the axis uses “sectarian and religious plots” as a weapon. He said the Zionists and Americans are deploying the weapon by trying to paint a “sectarian tone” over regional conflicts.

‘Saudi war on Yemen guided by US plots for region’

Referring to the war on Yemen, Nasrallah said contrary to what Saudi Arabia sought to portray at the beginning of the military campaign, the conflict has nothing to do with “Shias and Sunnis.”

The Hezbollah chief was referring to the main Islamic religious strands and attempts at sowing division between the two.

“The war is rather guided by the United States’ goals and its plots for the region,” Nasrallah said.

He said there was a “media war” underway against Yemen’s defenders to cast them as the party that rejects any cessation of the war and Riyadh as the one that seeks the campaign’s termination.

Saudi Arabia led its allies into the war in 2015 to restore power to its favorite officials in Yemen, but they have hit a dead end in the face of the Yemeni army's successful defense campaign, which has left Riyadh and its partners bogged down in the country.

In recent weeks, Yemen’s defense forces have managed to retake many areas from the coalition in the west-central province of Ma’rib. Saudi Arabia and its allied Western government’s media outlets are, at the same time claiming that Sana’a is rejecting Riyadh’s peace proposal.

Sana’a, on the other hands, notes that it has not received any such initiative in writing, and asserts that Riyadh has to show it is serious about ending the war.

Nasrallah insisted that any potential truce has to be accompanied by a cessation of the siege, as required by Sana’a.

They are, thus, seeking to keep up their pressure on Yemen in order to force it to the negotiating table, he stated. “The invading forces are trying to realize what they could not realize through war by means of social pressure.”

However, the Yemenis “have the upper hand” and cannot be duped into ending their defense of the country, Nasrallah asserted. He, therefore, advised Riyadh “not to waste your time. Dishonesty will not have any benefit for year. Just go ahead and end the war and the siege.”

‘US, Israel heading towards disintegration’

Nasrallah further turned to the issue of the United States and its attitude towards Iran under the new US administration.

He described the United States’ alleged “insistence on diplomacy” towards Iran under the new administration as “not something that has resulted from moral generosity on the part of Washington, but rather a result of Iran’s increasing power.”

The US is not like how it used to be, he said. “It is in the twilight stage,” a reality already emphasized by Leader of the Islamic Republic Ayatollah Seyed Ali Khamenei.

“Israel is heading towards decline and disintegration like its master,” Nasrallah said, referring to the traditional American-Israeli alliance.

Nasrallah again invited all to contemplate the issue of “the US’s decline” as explained by Ayatollah Khamenei. “The US’s path is one of decline and downfall, and the resistance’s path is one of ascendance.”

Iran did not concede to the US under former president Donald Trump’s sanction-powered “maximum pressure” campaign, and it would never yield to Washington now that the Islamic Republic is on the verge of putting the sanctions behind either,” he added.

Nasrallah noted how the administration of ex-US president Donald Trump sought and failed to impose a hugely controversial plot on the Palestinians that it called “the deal of the century.”

Trump unveiled the plot late last year with Israeli Prime Minister Benjamin Netanyahu at his side at the White House. The plot included unprecedented favors for Tel Aviv, including allowing it to seize the lands on which it has been building illegal settlements.

Nasrallah said the US would not be able to realize the plot after Trump either since the so-called peace plan has suffered “clinical death.”

Aside from Trump, whose presidency has come to an end, the other force behind the deal, namely Israeli Prime Minister Benjamin Netanyahu, was also “in dire circumstances now” given the problems surrounding his political career, Nasrallah added.

The Hezbollah chief said the fact that the Israeli regime was forced to hold back-to-back elections over the past years reflected “the political crisis the regime is suffering from and the divisions within Knesset (Israeli parliament).”

Fate of future war to be determined by resistance

The regional resistance front has been through the toughest stage of its history over the past decade given the developments that targeted in Lebanon, Syria, and Iraq as well as the US’s intense sanctions against Iran, Nasrallah said.

“The resistance axis is seriously pursuing increasing of its capabilities…. It is these capabilities that will determine the fate of [any] future warfare,” he added.