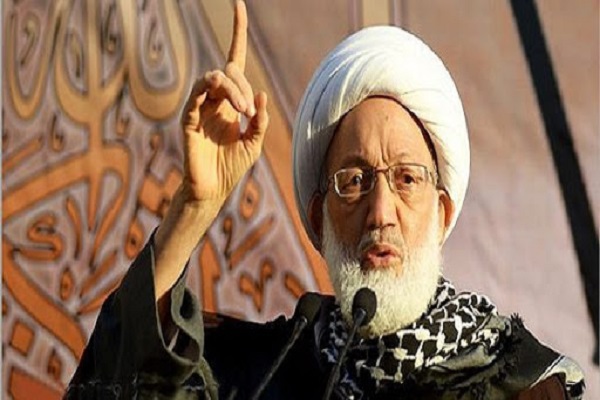 In a statement carried by Arabic-language Bahrain Mirror news website on Thursday, the senior cleric called on the ruling Al khalifa regime to choose between the deaths of the dissident inmates and their release.

"One of the worst things that the government of Bahrain does is to keep prisoners as leverage for political bargaining, especially now that the coronavirus [pandemic] is attacking [Bahrain's] prisons with full force," the senior cleric added, Press TV reported.

Last month, Sheikh Qassim said no serious solution or successful reconciliation would be accepted without the release of prisoners and that the success of a solution is linked to the release of all prisoners of conscience and top figures of the uprising.

“The solution lies in giving freedom to all prisoners of conscience. Do it quickly for the sake of the whole nation," he said on March 10.

Concerns have grown recently over the spread of the new coronavirus in prison centers.

Thousands of political activists and opposition figures are in Bahraini prisons as part of a crackdown on a 2011 popular uprising.

Human rights groups and international organizations have already criticized Bahrain over the situation of its prisons.

The detention facilities are said to be overcrowded and lacking proper sanitation.

Thousands of anti-regime protesters have held demonstrations in Bahrain on an almost daily basis ever since the popular uprising began in the country in mid-February 2011.

They are demanding that the Al Khalifa regime relinquish power and allow a just system representing all Bahrainis to be established.

On March 5, 2017, Bahrain’s parliament approved the trial of civilians at military tribunals in a measure blasted by human rights campaigners as being tantamount to the imposition of an undeclared martial law.

The February 14 Youth Coalition, a movement named after the date of the beginning of the Bahraini uprising, called last month for the formation of a coalition consisting of all political groups as well as the people of the Arab country to overthrow the country’s political system.

In a statement, the movement called for unity to bring about “fundamental changes” in the country’s political system, describing such reforms as the most important and legitimate demand of the Bahraini people.