Women's Participation in Innovation Should Be Norm in OIC Member States 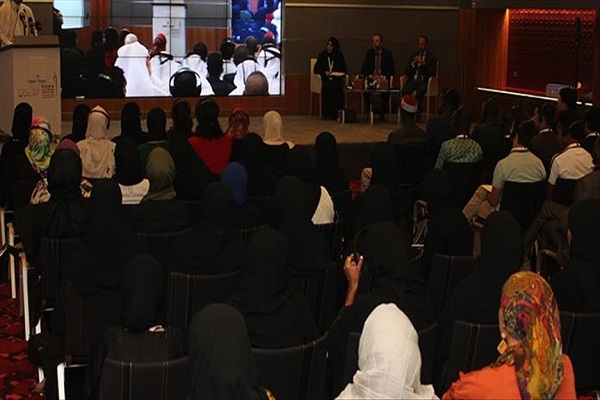 The three-day summit, organized by the Islamic Cooperation Youth Forum (ICYF) is hosting successful Muslim women from around the world under the theme “Women as the Emerging  Power of the 21st Century.”

The second panel of the summit focused on "New opportunities and prospects for young female scientists.”

In the panel, Maha Akeel, director of social and family affairs at the Jeddah-based Organization of Islamic Cooperation (OIC), delivered the opening speech.

Akeel said that in Saudi Arabia, many women drop out of the field of sciences and medical school because of the limited job opportunities for women in the field or leave work after getting married or having children.

Akeel said that during the past 10 years, however, things have changed in Saudi Arabia, with more schools opening in the field of science with more job opportunities. She highlighted a report by the Saudi Education Ministry which said that women have outnumbered men in graduating with bachelor's degrees in biology, mathematics and physics and noted that Saudi women now serve as leaders in the research field.

She noted that the outbreak of the COVID-19 pandemic has proven the importance of female scientists, engineers, mathematicians and researchers not only in developing countries but also in developed countries.

"Since the outbreak of the pandemic, scientists and medical personnel have been fighting the virus and developing techniques against it, and female scientists and doctors have been at the center of this fight. Let's not forget that the scientists who developed the BionTech vaccine were a husband and wife team. Nevertheless, just as the virus has had an impact on women's family life and employment, it has also had a significant negative impact on women scientists, particularly those in the early stages of their career. This will contribute to widening the existing gender gap in science," Akeel said.

She also emphasized that recent statistics show that there has been an increase in the enrolment of female students in stem degree fields but that this was not translating into the greater presence of women in high-level decision and policymaking roles.

"According to recent studies, 41% of PhD students in STEM [science, technology, engineering and mathematics] fields are women. Among these, only 28% are on a tenure track," she said.

"In regions such as Central and Eastern Europe, the Arab world, Latin America, the Caribbean and Central Asia, women make up between 39% and 48% of researchers, and this is on the higher end. On the other hand, in North America, Western Europe, Sub-Saharan Africa, East Asia and the Pacific and South and West Asia, the figure is between 23.1% and 32.9%," she added.

She emphasized that many Muslim countries were doing much better than most of the Western countries of the global North.

"Together, we must ensure that women's participation in innovation​​​​​​​ is not the exception in OIC member states but becomes the norm of life and work," she noted.